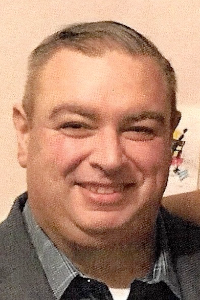 Joseph F. Lydon, III, age 49, of Mansfield, formerly of Taunton, passed away peacefully, with his loving family by his side on Sunday, November 17, 2019 at the Hope Health Hospice Center in Providence. He was the beloved husband of Denise C. (LaBorne) Lydon, to whom he was wed for the past eighteen years.

Born in Boston, MA on October 5, 1970, he was a loving son of Joseph F. Lydon, Jr. of Mansfield and the late Janet (Lauretano) Lydon.

Joe spent his early childhood living in Dorchester. His family later moved to Taunton where he grew up and was a graduate of Coyle-Cassidy High School. He furthered his studies graduating from the Norwich University, Military College of Vermont and proudly served his country as a reservist in the United States Coast Guard.

A resident of Mansfield for the past fourteen years, Joe had most recently worked as a Life Sales Field Director for the Cincinatti Life Insurance Company and had previously been employed for many years at Ohio National Financial Services.

Along with his family, who were the focal point of his life, he was a communicant of Saint Mary’s Church in Mansfield and a former member of the Knights of Columbus in Taunton.

Joe was an avid New England sports fan and was a longtime collector of sports cards and stamps. He was always up for a good discussion on the subjects of politics and history and had a sweet tooth for cooking and dining out.

Joe will always be remembered for his great sense of humor and charitable nature and will be sadly missed by his family, friends and the many people whose lives he touched.

In addition to his wife and father, he is survived by his devoted children: Christina N. Lyndon, Joseph F. Lydon, IV, Kelley L. Lydon and Michael E. Lydon all of Mansfield. He was the dear brother of Nicole M. Laflamme and her husband Randy of Taunton. He was the adoring son-in-law of Eugene and Nancy LaBorne of Plymouth and the brother-in-law of Kevin LaBorne, Mark LaBorne and his wife Sherry and Jeanine LaBorne. He is also survived by many cherished aunts, uncles, nieces, nephews and cousins.


His funeral Mass, to which relatives and friends are cordially invited to attend, will be celebrated on Saturday, November 23rd at 11:00 A.M. in Saint Mary’s Church, 330 Pratt St. (Route 106) Mansfield. Burial will follow at Saint Mary’s Cemetery in Mansfield.

In lieu of flowers, Joseph’s family has requested that contributions in his memory be made to the Jimmy Fund at the Dana-Farber Cancer Institute, 450 Brookline Avenue, Boston, MA 02215.