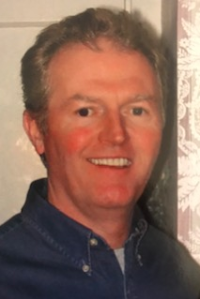 Kevin Paul O’Rourke, 66, of Millis died tragically on Friday, November 15, 2019, from injuries that he sustained in a car accident. He was the beloved husband of Nancy M. (Reardon) O’Rourke for 33 years.

Kevin was a lifelong resident of Millis. He graduated from Millis High School and earned his Bachelor’s Degree from UNH.

He worked as a healthcare delivery specialist for SDS for many years.

Kevin was an avid New England sports fan suffering through the drought years as well as enjoying the many recent championships. He could often be seen at his home sitting in his Adirondack chair with his dog, Willy, at his side. Whether it was trips to the Cape and beyond or holiday parties, Kevin always enjoyed spending time with his family and friends. Most of all he treasured the times he shared with Nancy, or as Kevin would say, his “P”. Kevin will be remembered for his easy-going personality, his welcoming smile, and the pride he took in being a Millis resident.

He is also survived by his nieces and nephews Erin Watson, Stephen Kelly, Christina Mayer, Michael and Kara Ghiloni, Elizabeth, Megan and Kyle Reardon, and Bridget and Cole Flaherty and several great-nieces and great-nephews, aunts, uncles and cousins. He was predeceased by his nephew Sean Kelly.

Relatives and friends are invited to attend his funeral from the Ginley Crowley Funeral Home, 3 Barber Street in Medway (www.ginleyfuneralhomes.com) on Tuesday, November 19 at 9 a.m. followed by a funeral Mass at St. Mary’s Church in Franklin at 10 a.m. Burial will follow at Prospect Hill Cemetery in Millis.

In lieu of flowers, donations may be made in Kevin’s memory to the MSPCA, 350 South Huntington Ave., Boston, MA 02130.