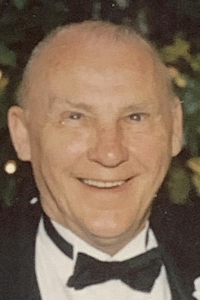 Mr. Kenneth W. Hall, a resident of North Port, Florida and beloved husband of the late Joan (Zeloski) Hall passed away at his home on Friday morning, November 15, 2019. He was 90 years old.

Born in Lawrence, Massachusetts, on March 3, 1929, he was the beloved son of the late Leslie and Mary (Newell) Hall. Mr. Hall was a Korean Navy veteran, entering the military at Boston on May 27, 1948 and received his honorable discharge South Carolina on May 16, 1952. Kenneth served honorably and distinguishable on the USS Harold J. Ellison DD-864 in the Pacific during the Korean War as a Boatwain’s mate 3rd class. In civilian life, Kenneth worked for Avco/Textron systems where he was in charge of protecting some of the Apollo space crafts and other sensitive crafts and materials.

In his spare time, he enjoyed fishing and traveling around the world. Above all, Ken was a very devoted husband, father and grandfather. He will be dearly missed.

He is survived by his loving children; Brenda and her husband Kenneth Hickman of Georgetown, Brian and his wife Dianne Hall of Venice, Florida and Steven and his wife Laurel Hall of North Port, Florida, grandchildren; Maegan, Ryan, Bridget, Melissa, Chad and Jeffrey, and six great-grandchildren. He was also predeceased by his loving sister Evelyn Taylor. He also leaves his niece Beverly Collings behind.

His funeral services will be privately held. Arrangements have been entrusted to the Burke-Magliozzi Funeral Home of Andover. For additional information, please visit, www.burkemagliozzi.com.