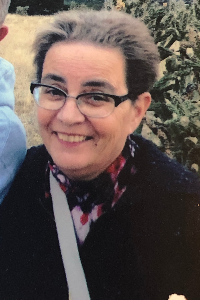 It is with great sadness the family of Mary E. Gould, 69, of Londonderry, NH announces her passing on Thursday, November 14, 2019 at her home following a courageous and long fought battle against cancer. She was born on July 20,1950 in Boston, MA, a daughter of James and Ann (Crawford) Toomey. Mary received her Bachelor of Science degree at the University of Massachusetts- Lowell and worked as a nurse at Massachusetts General Hospital for many years. Later, she worked in the medical coding and insurance field. She had a deep love for her family that included spending Thanksgiving Dinners at her sister's house on Cape Cod and hosting Christmas each year, which gave her quality time and conversation to catch up on family happenings. She enjoyed being near the ocean and going camping. Additionally, she had a passion for finding the best lobster roll in New England.

Mary will be lovingly remembered by her husband and best friend of 49 years John Gould, her two sons Gregory Rowangould and Jonathan Gould; two daughters Heidi Gould and Jenny Gould; two brothers Paul Toomey and James Toomey; and her sister Jane Crowley. Mary will be fondly remembered by her 5 grandchildren; Alena and Mara Rowangould, Samuel and George Gould and Deborah Fidler. She is predeceased by her parents as well as her sister Ann Toomey.

Calling hours were held on Saturday, November 23rd from 1:30pm to 3:30pm at the Peabody Funeral Homes and Crematorium, 290 Mammoth Rd., Londonderry with a service that followed at 3:30pm in the funeral home.