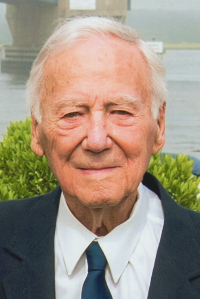 WEBSTER - John Thomas Stefanik, 95, passed away peacefully on November 14, 2019 after a period of declining health.

John was born in Webster on February 9, 1924, the only son of Andrew and Angela (Gajewski) Stefanik. He is predeceased by his wife of 63 years, Barbara (Madura), and by his infant son Matthew.

He is survived by his loving family including sons Gregory of Webster, Mark and his wife Anna-Lee of Dudley, Jeffrey and his wife Donna of Woodstock, CT, Christopher and his companion Lori Johnson of Webster, and daughter Angela and her fiancé Robert Alves of Putnam, CT. He is also survived by his adored grandchildren: Jessica-Lee of Dudley, Samuel of Newport, RI, Alison of Philadelphia, PA, Adam of Emigrant, MT, Katherine of Auburn, Andrew of Dudley, Matthew and Stefanie of Putnam, CT, Nicholas of Providence, RI, Abigail of Bristol, CT and by his great-granddaughter, Anna Dorothea of Dudley as well as many nephews and nieces.

John graduated from Bartlett High School in 1941 where he was a three-letter athlete. He enlisted in the Marine Corps that summer and was in boot camp when Pearl Harbor was attacked. He saw action in the Asiatic-Pacific Theatre, including Guadalcanal and New Hebrides. The Japanese evacuated Guadalcanal on his nineteenth birthday, a memorable birthday present. John was proud of his service in the Marine Corps.

After the war he attended Nichols College where he played basketball and baseball. He played professional baseball from 1948 to 1951 in several leagues on the East Coast. He returned to Webster and married Barbara on April 25, 1953 and together they eventually owned and operated the popular Andy’s Restaurant until 1981, famous for its Rose Room. He then worked for the Town of Webster until retirement.

He was a two-time inductee of the Bartlett Athletic Hall of Fame and former President of the Webster Exchange Club. He was a passionate Red Sox and Patriots fan and loved to watch UConn girls’ basketball games. He enjoyed all sports particularly baseball and golf. He liked to socialize and to travel. In his later years he was a familiar figure about town, out with his friends taking their daily morning walks. John’s Slovak heritage meant a lot to him.

His funeral will be held Wednesday, November 20, from Scanlon Funeral Service, 38 East Main Street, with a Mass at 11:00 AM in Saint Louis Church, 14 Lake Street. Burial will be in Saint Joseph Garden of Peace, with the Webster-Dudley Veterans Council providing the military honors. Visitation will be held from 9:00 to 10:30 AM Wednesday in the funeral home, prior to the Mass. In lieu of flowers donations in his name may be made to Day Kimball Hospice, 320 Pomfret Street, Putnam, CT 06260.