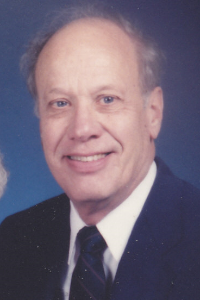 Dr. William Roy Kopp, 92, of Anderson, passed away November 14, 2019 at his residence after a brief illness.
He was born January 24, 1927 in Anderson, the son of Otis Alba and Gladys (Heath) Kopp.
He graduated from Anderson High School in 1944, Indiana University and I.U. School of Medicine, and then served his 5 years as general surgery residency in Detroit. He was a general surgeon for more than 30 years at both St. Vincent and Community Hospitals in Anderson, where he served as Chief of the Medical Staff and also President of the Medical Staff before retiring in 1989.
He served in the United States Navy. He was a member of St. Mary's Catholic Church.
He is survived by his children, Kathryn (Greg) Kalisz, Dr. William J. Kopp (friend, Debra Wohlberg), Ann (Mike) Everett, James (Cindy) Kopp, Michael (Gail) Kopp, Daniel (Angie) Kopp, Jane (Jamie) Morris; 19 grandchildren; nine great-grandchildren; a companion, Iris Bilbrey and several nieces and nephews.
He was preceded in death by his parents, his wife, Joan Elizabeth (Kinley) Kopp who died March 6, 2008; two granddaughters, Hannah Morris and Meagan Kopp; three sisters, Florence, Emma Lue and Judith.
Mass of Christian Burial will be held at 10:00 A.M. on Monday, November 18, 2019 at St. Mary's Catholic Church with Father Mark Walter officiating. The burial will be in East Maplewood Cemetery following their lunch at Knights of Columbus after the Mass.
Visitation will be from 3 to 6 p.m. on Sunday, November 17, 2019 at Rozelle- Johnson Funeral Service.
In lieu of flowers memorial contributions may be given to St. Vincent DePaul Society.
Post online condolences at www.rozelle-johnson.com