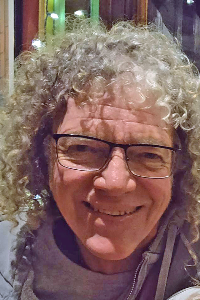 
Martin "Marty" Alexander Buckosh, loving son, brother, uncle and friend, has moved on to his next journey. He passed away in his sleep while recovering at his Wellfleet home from a bicycle accident. Marty, the youngest of 4 boys, was a 1975 graduate of Lorain Catholic High School in Ohio. From 1975 -1978 Marty served in the Army with top secret clearance from the NSA, monitoring and intercepting signal intelligence.

After his years in the service, he fulfilled his love for travel, living in various locations. In the early 1980's he resided in San Diego, working in a vintage clothing store. In the mid 80's he continued his work in retail living in New York City. The late 80's Marty enjoyed experiencing Provincetown. In the early 1990's Marty spent several years living life to its fullest as he drove his VW Van across the country and throughout Mexico. In 1995 he returned to the San Diego area. Marty's love of people and a desire to understand their minds led him to study research psychology. In 2004 he obtained his Bachelors from California State, Long Beach and in 2008 his Masters from California State University, San Marcos.

In 2008 Provincetown again became his main place of residence. He began working summers at Northern Lights Hammock shop and he worked for the AIDS coalition. In 2010 he published a research article in the Journal of Medical Toxicology for his work with UMass Medical School.

In 2016 Marty became part owner in Northern Lights Hammock Shop. Though he had a soul that loved to wander, he was strongly anchored to his family and friends by love and compassion. He always made time for other people, and working at the hammock shop helped him do just that. On the off seasons he would rotate between Ohio, Florida, and Georgia, visiting the people he cared deeply for. His loves were Cleveland sports teams, music, tennis, yoga, the ocean, his bicycle and deep thought. He was an amazing light, a very positive soul. You couldn't help but be happy around him. Children especially felt his joy, thus giving him the nickname Magical Marty. He will be missed deeply but his spirit will live on forever.

He is survived by brothers, James (and Barbara) Buckosh of Sheffield, Ohio. Robert (and Jennie) Buckosh of Ellabell, Georgia. Theodore (and Nancy) Buckosh, of Brighton, Ohio. Nieces and nephews: Kristie Brinkman, Kathie Buckosh, Kellie Hughes, Yahn Buckosh, Roman Buckosh, Christopher Buckosh. He also has 16 great nieces and nephews and a great-great niece and nephew. He is preceded by his parents Helen (Ribaric) & Alex Buckosh and his nephew Robert Buckosh Jr.