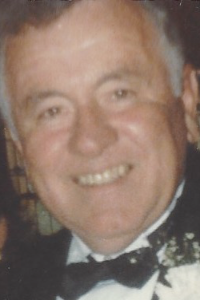 Paul D. Murphy, age 88, a lifelong resident of Attleboro, passed away peacefully on Monday, November 11, 2019 at the Madonna Manor Nursing Home in North Attleboro. He was the beloved husband of Marilyn Y. (Morris) Murphy, to whom he was wed for sixty-four years.

Born in Attleboro, MA on December 29, 1930, he was a loving son of the late Andrew and Madeline (Doran) Murphy.

Paul grew up in the Hebronville section of Attleboro and was a 1948 graduate of Attleboro High School. During the Korean War, he proudly served his country for four years as a member of the United States Navy. He later continued his education, graduating in 1958 from Boston College and was a Golden Eagle.

Prior to retiring, Mr. Murphy had been employed as a salesman for twenty years at Bell & Howell in Needham and previously worked at the former Burroughs Corporation in East Providence.

Paul loved reading and writing and was the author of the book Hebronville: A Retrospective which is part of the Attleboro Public Library and was a recipient of a commendation from the Attleboro Historical Society.

Above all, he was a true and loving husband, father and grandfather. He was a happy man. “Paul’s family thanks the good and caring staff at Madonna Manor Nursing Home for their constant loving and professional care, as well as thanks and gratitude to Hope Hospice for their compassionate care over the past two years.”

In addition to his wife, he is survived by his devoted daughters: Colleen M. Lucia and her husband David of North Attleboro, Ann M. Keady and her husband Kurt of Dedham and Erin M. Pigott and her husband Charles of Arlington. He was the cherished grandfather of Michael, Thomas and Joseph Lucia, Griffin, Molly and Meghan Keady and Charles and Matthew Pigott. He was the dear brother of the late John and Arthur Murphy and is also survived by his sister-in-law Jessie Murphy of Attleboro, as well as many nieces and nephews.

His funeral Mass, to which relatives and friends are cordially invited to attend, will be celebrated on Tuesday, November 19th at 11:00 A.M. in Saint Mary’s Church, 1 Power St., Norton. Military honors will be rendered at the conclusion of services.

Visiting hours are omitted and burial will take privately at the Massachusetts National Cemetery in Bourne.

In lieu of flowers, Paul’s family has requested that contributions in his memory be made to Saint Mary’s Church Building Fund, 1 Power St., Norton, MA 02766.

Arrangements are under the care and direction of the Norton Memorial Funeral Home, 19 Clapp St., Norton.