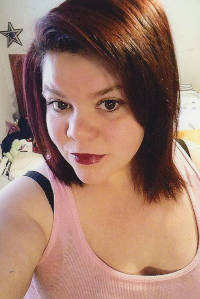 She leaves her husband and high school sweetheart, Jonathan M. “Jon” Sarty; her 4 year old son, Jonathan M. Sarty, Jr., both of Southbridge; her mother, Tina Lowe and step-father John Padgett of Charlton; her sister, Savannah Padgett, whom she adored, of Charlton; her father, Frank Benson and his wife Heather (Dwyer) Benson of Thompson, CT; her grandfather, Robert Lowe of Charlton; her 3 sisters, Kylie Nygard of Florida, Jaqueline Bonengel of Frankfurt, Germany and Cheyanne Benson of New Hampshire; her three brothers, Cory Gelardi, and Ryan and Alex Briggs all of Millbury; her sister-in-law, Tanya and brother-in law Ricky, both of Southbridge; several aunts and uncles; many nieces and nephews and cousins. She also leaves her dog Jack and her cat Anastasia. She was predeceased by her grandmother Janet Lowe, by her grandparents Frank and Patricia Benson, by her great-grandmother Dorothy Benson, great grandparents John and Edna Kujawski, and by her mother-in-law, Tina Perrin.

She was raised in Webster and graduated from Bartlett High School in 2010. She lived in Port Richey, Florida, and Charlton before moving to Southbridge two years ago. She spent most of her life with her husband and son doing family things together. She enjoyed spending time with her family and friends. She spent a lot of time with her nieces and nephews. She enjoyed camping, fishing, Six Flags and most of all her job at Big Lots with her Big Lot Family in Webster.