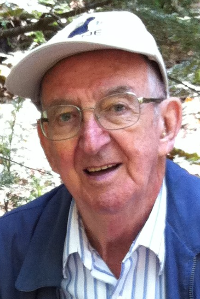 He worked as a missionary, pastored a church in Goodwin’s Mills, Maine from 1972-77 and in Milpitas, California from 1977-79. He was an assistant pastor for ten years in South Berwick, Maine from 1979-89 and then became Missions Director for Greater Grace World Outreach where he served and cared for many missionaries until he retired in 2005. After Lois passed into Heaven in 2009 he met Sandra Niles while visiting Grace Bible Church in Gorham, Maine. They married and he happily settled in Hollis Maine where they attended Grace Bible Church and loved their children and grandchildren.

The reciting of the many facts about his life do not do justice to the Father, Grandfather and beloved Pastor that he was. He will be missed beyond measure, but our glorious hope in the Heavenly Father assures us all that this is a temporary parting and we will be reunited on that peaceful shore.

In lieu of flowers, donations can be sent to Grace Bible Church Missions Fund.