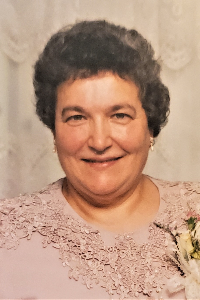 FALL RIVER… Ilda V. (Serodeo) Medeiros, 76, of Fall River passed away November 7, 2019 at St. Anne’s Hospital.
She was the loving wife of the late Manuel T. Medeiros to whom she had been married for 45 years before his passing.
Born in Povocao, St. Michael, Azores, she was a daughter of the late Jose V. Serodeo and Maria Vieira Medeiros. She had moved to America in 1974 and to Fall River in 2009.
Mrs. Medeiros was a communicant of St. Stanislaus Parish and had worked as a Glass Cutter for Princess House for over 20 years prior to her retirement. She enjoyed cooking and spending time with her family.
Survivors include her daughter: Katherine Banalewicz and her husband Michael of Fall River; her son: Michael J. Medeiros and his wife Karen of Fairhaven; her sister: Maria Dos Anjos Barbosa of Taunton; her brothers: Jose A. Serodeo of Taunton and Marcelino Serodeo of St. Michael, Azores; her grandchildren: Brittany Medeiros, Katelyn Banalewicz, Ashley Banalewicz, Olivia Medeiros, Michael Banalewicz and Chace Jabotte; several nieces and nephews. She was the sister of the late Maria Inez Medeiros Carriero, Isaltina Amaral and Manuel Serodeo.
Funeral to which relatives and friends are invited will be held Wednesday, November 13, 2019 at 10:30 Am from the Boyko Memorial Funeral Home, 709 Broadway Fall River, MA 02724 followed by a Mass of Christian Burial at 11 AM at St. Stanislaus Parish, Rockland St. Fall River. Burial will be private. Calling hours will be held Wednesday from 9 – 10:30, prior to Mass.