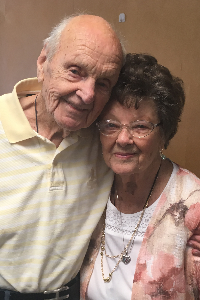 Louise Evelyn Molis, 93, formerly of Adams Lane, North Providence, died Tuesday, November 5, 2019, at Cortland Place in Greenville. She was the wife of Vito J. Molis, who died on November 10, 2019 at the Hope Hospice and Palliative Care in Providence. They celebrated their 73nd wedding anniversary in June, 2019.

Mrs. Molis was born in Providence, she was a daughter of the late Thomas and Anna (Hart) Browning. They had lived in Providence for 28 years before moving to North Providence. Evelyn had worked at the former Mine Safety in Smithfield for 25 years before retiring in 1986. She was an active member of the Smithfield Senior Center.

Mr. Molis was also born in Providence, he was a son of the late Domenic and Antose (Dzekwich) Molis. He served in the US Navy during WWII. He was a member of the Lithuanian Club for many years. Mr. Molis had worked as a railroad car inspector for Conrail for 38 years before retiring in 1986.

A Mass of Christian Burial will be held Friday, November 15, 2019 at 11 am in St. Philip Church, 622 Putnam Pike, Greenville. Visitation will be Friday morning, 8:30-10:30am in Anderson-Winfield Funeral Home, Rt 44 at Greenville Common, Greenville. Burial will follow in RI Veteran’s Cemetery, Exeter. In lieu of flowers, donations in Louise Evelyn’s memory may be made to the Smithfield Senior Center, 1 William J. Hawkins, Jr. Trail, Smithfield, RI, 02828 and in Vito’s memory to the Hope Hospice and Palliative Care, 1085 North Main Street, Providence, RI 02904