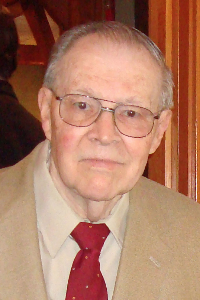 …Ret. President of DEKR Corporation of Woburn; 88
TEWKSBURY – Joe died peacefully Wednesday evening, November 6, at the age of 88, at the High Pointe Hospice House in Haverhill, surrounded by his family. He was the beloved husband for sixty-two years of Rosemarie A. (Gelsomini) Krugh, who died in 2014.
Joe was born in Detroit, Michigan, the only child of the late Andrew and Nettie (Kucher) Krugh, but was raised in Boston. He graduated Boston English High School in 1948. Joe enlisted into the U.S. Navy and served in the Mediterranean Sea aboard the USS Marcos during the Korean War Era.
He and business partner Thomas D’Espinosa founded DEKR Corporation in Woburn where Joe served as President until his retirement. In his retirement years, he worked for TNT in Merrimac, MA.
He leaves six children, Kevin and his wife MaryJo (Berube) Krugh of Merrimac, MA, Karen and Bill Lumbard of Tewksbury, Kelly Shea of Tewksbury, Kathleen and her husband Ed Fenlon of Haverhill, Kenneth and his wife Wendy (Gardner) Krugh of Dracut, and Keith Krugh and his wife Tiffiny Taylor-Krugh of Hawaii; fourteen grandchildren; several nieces and nephews; and was predeceased by his son-in-law, Timothy Shea.
At Joe’s request, funeral services were private. Memorials may be made to High Pointe Hospice House, 360 North Ave., Haverhill, MA 01880, or to St. Dorothy’s Church, 11 Harnden Street, Wilmington, MA 01887. The Tewksbury Funeral Home is honored to serve the Krugh family. Visit: tewksburyfuneralhome.com