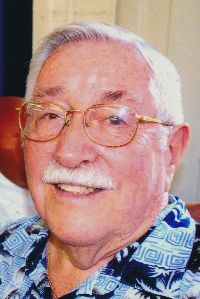 Harold E. “Gene” Sampson, 93, a lifelong resident of Whitman, passed away on Wednesday November 6, surrounded by his loved ones. He was the beloved husband of sixty-three years to Elaine C. (Murphy) Sampson.

Born and raised in Whitman, he was the son of the late Ralph and Esther (Corbett) Sampson and a graduate of Whitman High, Class of 1947.

During his time in the Navy, Gene learned his craft as a machinist and prior to his retirement worked several years for the F.H. Peterson Company of Stoughton.

He had been a volunteer for the Boy Scouts and a communicant of the Holy Ghost Church. He enjoyed square dancing, traveling, camping in New Hampshire, and was an avid fan of the Patriots. However his greatest joy was spending time with his large family and following the countless activities of his children and grandchildren.

Relatives and friends are welcome to attend his funeral services on Tuesday November 12 at 8:15AM from the Blanchard Funeral Chapel, Plymouth Street (Rte. 58 at the rotary circle) Whitman, followed by a funeral Mass at 9:00AM in the Holy Ghost Church, Whitman. Burial will follow in the St. James Cemetery, Whitman. Visitation will be held on Monday November 11 from 4:00-8:00PM.