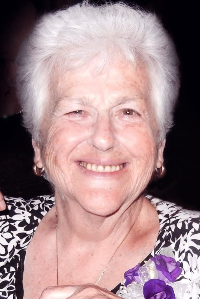 
Barbara A. Williamson, a longtime resident of Tewksbury passed away unexpectedly, Tuesday, November 5, 2019, at the Lahey Hospital and Medical Center in Burlington. She was 87 years of age. Barbara was the beloved wife of the late Robert E. Williamson, Sr. Born in Boston she was the daughter of the late Antonio and Eleanor (Gleavy) Corbo.


Barbara was raised and educated in Dorchester. She worked for a number of years at Filenes Basement where she met her true love and future husband to be, Robert. Barbara has been a resident of Tewksbury for nearly sixty years, family was Barbara's main focus in life and everything she did revolved around her family and her strong Catholic faith. In her leisure time she enjoyed working on puzzles and playing cards with family and friends. Her home had an open door policy and any family member or family friends were always welcomed. Barbara will fondly be remembered for her devotion to her husband and family, for the love she shared and in return received from all who knew her. She will be greatly missed.


She is survived by her children; Barbara Rodwell of Tewksbury, Robert Williamson Jr. of Wilmington, Paul Williamson and Charlene of Derry, NH, Donald Williamson and his wife Sharon Schumaci of Atkinson, NH, Diane Carroll and her late husband Dennis of Belmont, NH, Joan Marden of Hudson, NH, Jack Williamson and his wife Gail of Salem, NH, Debra Gormley and her husband Michael of Burlington, and Mary Williamson-Flight of Tewksbury. She was the loving grandmother of 19 grandchildren and 21 great grandchildren. Cherished sister of Mary Odenweller of Randolph, Edward Corbo of Scituate, the late Robert Corbo and Jane Coakley. She is also survived by many loving nieces and nephews.