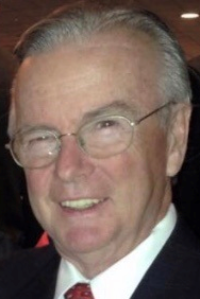 
John J. “Jack” McShera, III, 78, formerly of North Myrtle Beach, SC, died Monday, November 4th surrounded by his loving family. He leaves his wife of 30 years, Ellen (Marder) McShera; his three children, John J. McShera, IV and his wife, Elizabeth of Swansea; two daughters, Kathy Martinelli and her husband, Michael of Auburn, Marybeth Brosnihan and her husband, Timothy of Westborough; two brothers, William McShera and his wife, Marion of Worcester, David McShera and his wife Nancy, of Valrico, FL; four sisters, Betty Belanger of Sturbridge, Louise Burch and her husband, Robert of Leicester, Peggy Richards and her husband, Philip of Worcester and Mary Fran Terraccino and her husband, Joseph of South Hackensack, NJ; nine grandchildren, Connor, Kevin, Catie, Kyle, Nicholas, Julianna, Jack, Kayla, Maeve; and many loving nephews, nieces and longtime friends. His two brothers, Robert McShera and Richard McShera, predeceased him. He was the proud patriarch of the McShera family and took great pride in being one of nine children.

He was born in Worcester the son of John and Marguerite (Riopel) McShera. Jack graduated from St. Peter’s Central Catholic High School, Worcester Junior College, and served in the Air National Guard. He was a lifelong salesman in the plastics industry retiring from Pitney Bowes. After retirement, he continued to work at Barefoot Resort and Golf, and truly enjoyed his time there. He was an accomplished athlete, a member of the Shrewsbury Tennis Club, the Worcester Running Club, and proudly completed the Boston Marathon twice and the Newport Marathon once. His true passion was golf and he served as The Sterling National Country Club president for several years. His most cherished time was spent with his grandchildren, attending their various sporting events, and supporting all their accomplishments.