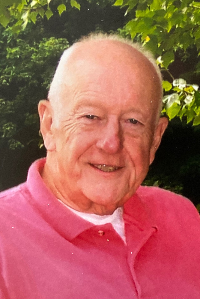 Francis G. (Frank) Hale III, 85, of Springfield, died peacefully on November 4, 2019.
The son of Francis and Eileen (Hynes), he was raised in South Weymouth. After graduating from Weymouth High School he earned a degree in engineering from Tufts University in 1957 and an MBA from Northeastern University in 1986. A member of American Legion Post 286, Frank served a year in France as a member of the Air National Guard during the Berlin Crisis. Frank spent over 40 dedicated years working for Boston Edison Co.
Frank married the love of his life, Joan (Kelly), in 1958 and together they raised six children in Canton: sons Frank, Michael (Rachel) of Northampton and Tom (Lauri) of Woodbridge, VA, and daughters Mary-Lee Hood (Tom) of Memphis, TN, Kelly Dietz (Jon) of State College, PA, and Catherine Duquette (Tom) of Wilbraham. A devoted father, he was active in community service in Canton. Frank especially was dedicated to serving as lector, CCD teacher, pre-cana counselor, and Eucharistic minister at St. John the Evangelist Church.
Frank was preceded in death by his sister, Jean O’Keefe, and his son, Francis. He is survived by his brother William (Elaine) of Danvers, and his wife Joan of Springfield. He leaves behind 10 grandchildren who will dearly miss his kind and gentle ways.
Visiting hours will be at the Dockray & Thomas Funeral Home, 455 Washington Street, Friday, November 8, from 5-8 p.m. Funeral Mass will be in St. John the Evangelist Church in Canton Saturday at 10 a.m. In lieu of flowers, donations may be made to St. Vincent de Paul (c/o St. John’s Church) or St. Jude Children’s Research Hospital, 501 St. Jude Place, Memphis TN 38105.
St. Jude’s Hospital