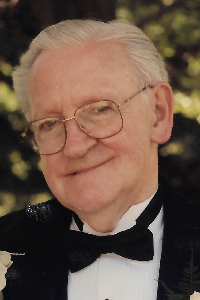 Mr. Joseph P. Menihane, 88, of Methuen passed away peacefully on Sunday, November 3, 2019 at the Blaire House in Tewksbury after bravely facing many illnesses. He was the son of the late Patrick and Margaret (Ryan) Menihane and was born in Lawrence on March 13, 1931. Mr. Menihane had been a Merrimack Valley resident all his life. He graduated from Central Catholic High School in 1949 and worked summers at Canobie Lake Park. He honorably served in the United States Army during the Korean War and enjoyed sharing these experiences with his children and grandchildren. Upon returning home he worked at Avco, Western Electric, AT&T, and Lucent. Mr. Menihane was a member of St. Monica Parish and the Pioneers of America. He was a strong supporter of Veteran causes and St. Jude Children and Research Hospital. Mr. Menihane had always been a loving husband, father, and ‘Pepere’, and he always had been willing to help whenever called upon. He also shared a brother-like relationship with his brother-in-law Joseph Norton. Mr. Menihane is survived by his loving wife of 61 years Jacqueline D. “Jackie” (Bouchard) Menihane of Methuen, three daughters: Karen D. And her husband Arist Frangules of North Andover, Patricia R. Unni and her significant other Raymond Barrieau of Methuen, Michelle C. and her husband John Cotnoir of Dracut, seven grandchildren: Christopher, Phillip, and Matthew Frangules, Hannah and Isabella Unni, and Emma and Sarah Cotnoir, one sister-in-law: Eleanor Bouchard of Methuen and one brother-in-law: Joseph Norton of Methuen, cousins: John Menihane and his wife Judith Menihane, Lillian Menihane, and many nieces and nephews. Donations may be made in Mr. Menihane’s memory to Methuen American Legion Post 122, 200 Broadway, Methuen, MA 01844 or the Methuen Veterans of Foreign Wars post 8349, 26 River St. Methuen, MA, 01844.

Family and friends are invited to call on Thursday, November 7th from 4:00 pm to 7:00 pm at the Edgar J. Racicot Inc. Funeral Home 1400 Broadway Rd., Dracut. Mr. Menihane’s funeral procession will begin on Friday, November 8th at 9:30 a.m. at the Racicot Funeral Home. His Funeral Mass will be celebrated at 10:30 a.m. at St. Monica Church in Methuen, burial will follow in Immaculate Conception Cemetery in Lawrence. Online condolences may be shared at www.racicotfuneralhome.com.