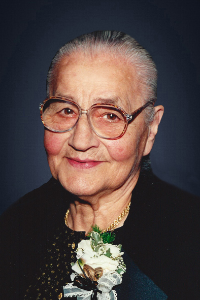 CHICOPEE ~ Vasiliki (Andritsogiannis) Kotsikopoulos, 102, of the Willimansett section of Chicopee, was Called Safely Home on Monday, November 4, 2019. She passed into Eternal Life at home surrounded by the care and comfort of her loving family. She was born in Voutirou, Greece on April 15, 1917, a beloved daughter of the late Evangelos and Harikleia Andritsogiannis. She lived in Greece for many years before moving to Springfield in 1966 and later moved to Chicopee in 2006. She was a communicant of Saint George Greek Orthodox Cathedral in Springfield where she was also a member of the Over 60 Club. She was predeceased by her beloved husband, George Kotsikopoulos who was Called Home on September 24, 1961; and her four dear siblings. She leaves her loving daughter, Maria D. Kondylis of Chicopee with whom she lived; her loving son, Evangelos Kotsikopoulos of Hampden; her six cherished grandchildren, Philip Kondylis and his wife, Laurie Ann, George Kondylis and his wife, Rebecca, Tina Fareti and her husband, Dave, George Kotsikopoulos and his fiancée, Chrissy, Vicky Lambrinides and her husband, Jason, and Eleftherios Kotsikopoulos and his wife, Angela; her ten cherished great-grandchildren; and her many dear nephews, nieces, cousins, friends and extended members of the Kotsikopoulos and Andritsogiannis families. Her relatives and friends are invited to attend a visiting hour on Thursday, November 7, 2019 from 1 p.m. to 2 p.m. which will be followed by a 2 p.m. funeral service at Saint George Greek Orthodox Cathedral, 2320 Main Street, Springfield, MA 01107, (Please meet directly at the Cathedral). Her burial will follow the funeral service at Oak Grove Cemetery, 426 Bay Street, Springfield, MA 01109. Her funeral arrangements are entrusted to the St. Pierre – Phaneuf Springfield Chapels, (413-737-1177), 7 Chapin Terrace, Springfield, MA 01107. Memorial donations may be made in her memory to Saint George Greek Orthodox Cathedral, 22 Saint George Road, Springfield, MA 01104. For more details, please visit: www.stpierrephaneuf.com
“May Her Memory Be Eternal”