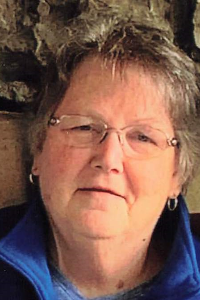 Marsha M. MacInnes passed away peacefully at home on Friday. She was 66. Born and raised in Somerville, she was the daughter of the late Edward and Rita (Anderson) MacInnes.

The devoted sister of Nancy Myers and her husband David of Pueblo, CO, Susan Patturelli of Stoneham, Michael MacInnes and his wife Esterlina of Medford, she was a loving aunt to John, Tracy and her husband Dan, Melissa, Scott, Alex and his fiancée Desi, Emily and Ian. She was also survived by her loving great-nieces and nephews: Johnnie and his fiancée Liane, Robert and his wife Kelsey, Mathew, Austin, Jazmine, Cheyanne, and her great-great niece, Mikayla.

Marsha enjoyed a career spanning more than 30 years with the John Hancock Insurance Co. in Boston. Throughout her tenure she held several positions and retired while working in the tax accounting office. A Somerville resident for much of her life, she lived in Malden, on the Medford line, for the past 23 years. Marsha was much more than an Aunt to several of her nieces and nephews. She treated them like her own kids where she was involved in every part of their lives, including teaching them how to hit or catch a ball or helping with homework. She attended their sporting events, school events, and every milestone in their lives. She was the go to babysitter and did everything and anything to make them smile when they were young and to support them as they got older - even if it was just to watch late night jeopardy to help them fall asleep. She was a loyal friend always making sure that there was an occasional get together with her various groups of lifelong friends to get caught up in each other’s lives. She was a dedicated friend to the late Terri Scirocco. She was an avid sports fan and liked to watch any and all sports. She loved the Red Sox, Patriots, Bruins and Celtics and disliked any team that played them. She had a quick wit and was loved by so many. She will be sorely missed.


Relatives and friends are respectfully invited to visit at the Dello Russo Funeral Home, 306 Main St., Medford, Wednesday from 4 thru 8 PM and again on Thursday, November 7th at 9 AM followed by a funeral mass celebrated in St. Joseph Church, 118 High Street, Medford, at 10 AM. Interment will be private.