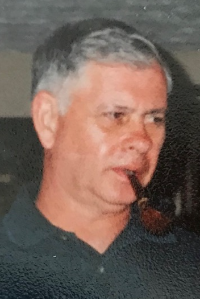 Hollis Center-Stephen L. Lambert 75, of Hollis Center, passed away Wednesday October 31, 2019 with his loving family at his side.
He was born in Portland, Maine and is the son of the late Leo H Lambert Sr. and Gertrude E. Lambert.
He was predeceased by his parents, and two brothers- William ”Bill” Lambert and Leo H. Lambert Jr.
Stephen graduate from Thornton Academy in 1963 and proudly served in the U.S. Army.
He was married to the love of his life, Diana for over 54 years. They had two children Katherine A. Bogdhan and her husband John of Hollis Center and their two children Troy and Taylor as well as their son Christopher S. Lambert Sr. and his son Christopher S. Lambert Jr. of Hollis Center. He is also survived by his brother Thomas W. and his wife Alice Lambert of Bangor.
Stephen retired from the Maine State Police at the rank of Lieutenant, after serving 20 years.
He worked for the U.S. Secret Service for two years following his retirement. Later he worked as a Selectman and Code Enforcement Officer for the Town of Hollis and as the MSAD 6 Transportation Director for 10 years before retiring to spend time with his wife and family and continue his passion as a professional quality cabinet maker.

A Mass of Christian Burial will be held on Wednesday Nov. 6 at 11 AM at Most Holy Trinity Church, Main St., Saco.

Online condolence messages can be submitted at the funeral home website, www.mainefuneral.com