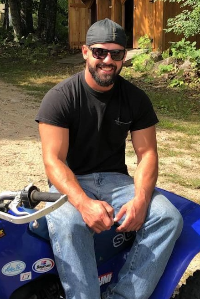 LIMINGTON - Aaron K. Preston, 29, died unexpectedly on October 29, 2019 in Standish, Maine. He was born in Machias on August 17, 1990 and grew up in Buxton. He attended Portland Arts and Technology High School and Bonny Eagle High School, graduating in 2009, and attended Southern Maine Community
College where he studied Manufacturing Engineering. He was a talented CNC machinist, working at
various local machine shops, most recently at TEM, Inc. in Buxton.

From a young age it was easy to see that Aaron was his own person. He was stubborn, opinionated and
wasn't afraid to speak his mind. He was tough as nails on the outside but on the inside was sweet and caring with a deep capacity for love. His heart was large and he was always there when someone needed him. He was the life of the party with a great sense of humor and infectious laugh. He made friends easily and made an impact wherever he went. Not one to sit still, he was passionate and lived life to the fullest in the way he chose. He put his whole heart into everything he did whether it was work, play, or love.

He loved the outdoors and spent his spare time hunting, fishing, ATVing, camping and tubing on the
Saco River with his friends. If he wasn’t on a bike or a 4 wheeler, he was working on them in his garage with his buddies. Aaron had no limits or boundaries. It was always whatever he was feeling at that time or place. His absence will be deeply felt by many.

He is survived by his mother, Sherri Evans (Heathcote) and partner Christopher Vincent of Buxton, his father Darien Preston of Whiting; 2 sisters, Alyssa Summerson and her husband Brandon and Darian Preston of Whiting; 2 step brothers, Jack Vincent of Wells and Christopher Vincent of Arizona; his grandparents Helen and Gary Renshaw of Buxton; a special aunt who was like a sister, Christina Fredette and her husband Christian; nephew Ryker Summerson, many aunts, uncles and cousins. His chosen family includes Mark Daniels of Raymond, Cory DiBiase and Alex DeRedin of Limerick, Rob and Isaac Rollins of Buxton, Nicole Prescott and Buddy Lubee of Wiscassett , Sean and Jessa Bearor of Limington , Nick Borough of Casco, and Tyler Wyman of Gorham. He had a large network of friends and acquaintances who loved him dearly. He is predeceased by his maternal grandfather Walter Heathcote Jr., paternal grandparents Horace and Noreen Preston and the love of his life, Britni Mclean.

A Celebration of Aaron's Life will be held on November 9th at 1:00 pm at Chap's Saloon function room, 1301 Long Plains Road, Buxton.
Contributions in his memory may be made to NAMI Maine, In Memory of Aaron Preston, 52 Water Street, Hallowell, Maine 04347.