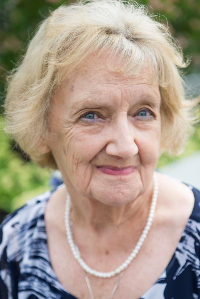 Margaret J. “Peggy” (Brockelbank) Cadigan, 84, of Halifax, passed away at her home on Thursday October 31st . She was the wife of the late Michael J. Cadigan, Jr.

Peggy resided in Holbrook for 28 years. She sold the family home in 1992 after her husband passed and resided in Halifax for the next 27 years

She retired from Dunningtons/CVS after 25 years as a pharmacy technician in Holbrook and Hanson. She then worked as a Senior Aide for the Halifax Council on Aging and also as a volunteer for the Meals on Wheels program.

She was devoted to her family and enjoyed spending vacations with them in New Hampshire, Cape Cod, Georgia, Maine, Pennsylvania, Nassau, Aruba and Canada.

She also leaves 13 precious grandchildren, Michael (Jessica), Corey, Thomas Jr. (Angie), James Jr. (Jen), Christina, Kayla, Robbie, Timothy, Hannah and Patrick Cadigan and David and Lindsay Howlett, and also two great grandchildren Chace and Tenley and one on the way. She was also the grandmother of the late Robert Cadigan and step-grandmother to Mary and Taylor. She also leaves a brother-in-law Emmett Cadigan of Medford, sister-in-law Patricia Christiansen of Billerica, Helen Sigda and her husband Walt of Pennsylvania, and many beloved nieces and nephews.

Her funeral services will be held on Tuesday November 5th at 10:00AM from the Blanchard Funeral Chapel, Plymouth St. (Rte. 58 at the rotary circle) Whitman, followed by a funeral mass at 11:00AM in the Our Lady of the Lake Church, Halifax. Burial will be in the MA National Cemetery in Bourne at 1:15PM. Visiting hours will be held on Monday November 4th from 4:00-8:00PM.

In lieu of flowers donations can be made in memory of Peggy Cadigan to the Halifax Council on Aging at 506 Plymouth Street, Halifax MA.