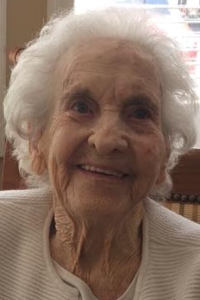 She was born on December 13, 1921, to Joseph A. and Helen I. (Menzies) Dodge in Somerville; the third of six daughters.

In her youth, Christina enjoyed singing, dancing, and acting in local theater groups. After losing both parents early in life, church and family became the center of her universe. She has a compassionate and charitable heart and loved hosting dinners for the extended family. Holiday gatherings were always at her home and something to remember.

Mrs. Bancewicz was a long time member of The Medway Community Church where she enjoyed many years of service in children’s and missions ministries. She worked as a manufacturing supervisor at Simtran Corporation in Medway until her retirement, after which she and Henry traveled extensively.

She will be deeply missed by her husband, her last surviving sister Roberta Tottingham and her husband Malcolm of West Peabody, and her three children: Christina Emmons and husband Barry of Clayton, NC, Kenneth Bancewicz and his wife Terri of Franklin, and Barbara Coakley of Blackstone. She is also survived by five grandsons and a granddaughter: Scott and Steven Emmons, Heather Emmons Boulier, Devin and Ethan Coakley, and Derek Bancewicz as well as 2 step-grandchildren Jeffrey Gibson and Lauren Gibson Rice; 2 great-grandsons, Malcolm Emmons, Griffin Boulier, and 3 step-grandchildren Hilary Boulier, Avery Gibson, and Jordan Rice.

A celebration of Life and Memorial service will be held at a later date.

Arrangements are under the care of the Ginley Crowley Funeral Home, 3 Barber St., Medway (www.ginleyfuneralhomes.com).