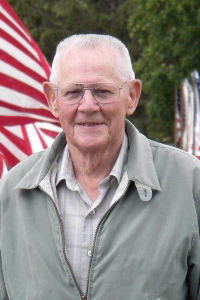 David was born in Scipio, Utah to Henry and Josie Ella Peterson Miller on July 31, 1926.

Following his mother’s passing, David Joined the United States Army on November 11, 1944 at age 18. He served in Europe during World War II. After his service, David was accepted into an American University in Biarritz, France, offered to selected veterans. He was honorably discharged on August 31, 1946 and returned to Scipio.

Upon returning to Scipio, UT David attended Utah State Agricultural College in Logan. David’s military service allowed him the opportunity and resources to further his education.

David graduated from Utah State with a degree in agronomy and married his sweetheart and Scipio native, JoAnn P. Miller, on March 17, 1950. They were sealed in the Salt Lake LDS temple.

As a soil researcher, job opportunities took the newlyweds to Colorado, where David attended Colorado University to complete his Master’s degree. David went on to earn his PhD at WSU in Pullman, Washington. His career took the family Idaho, Utah, Colorado, Wisconsin, and Washington State.

September 22, 1958 David accepted a position as a USDA Soil Scientist in Prosser, WA. Here David and JoAnn raised their sons, Ross and Dale, and daughter Diane.
David was always active in the Church of Jesus Christ of Latter-Day Saints. His callings included Sunday school Superintendent, counselor in the Branch presidency, scoutmaster, financial clerk, Sunday school teacher, Elder’s Quorum President, and first and second counselor in the Bishopric. “The church has always been an iron rod to hold onto.”

David was always willing to serve a neighbor or friend. His character was anchored in honesty and integrity. He held himself to a high standard in his language and morals. Genuine kindness and compassion radiated from him, and was always felt by his family. He will forever be remembered for his famous dill pickles, his green thumb, and his commitment to family.

David completed his earthly journey on October 22, 2019 following a stroke he suffered at home. He is preceded in death by his parents Henry and Josie Miller, brothers Arnell and Harold, wife JoAnn, and son Dale. David is survived by his son Ross of Guam, daughter Diane (Kolb) of Richland, 10 grandchildren and 29 great grandchildren.

The funeral services will be held at 12:00 pm on Saturday, November 2nd at Church of Jesus Christ of Latter-Day Saints on 1835 Highland Drive in Prosser, WA. A viewing will held at 11:00 am before the service begins. Interment will follow at the Prosser Cemetery. You may leave a message for the family at www.Prosserfuneralhome.com