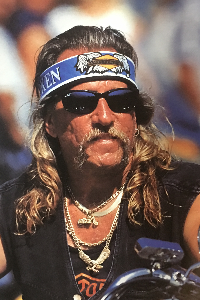 SEE NOTES FROM ELEANOR BELOW:

…Wing’s Used Auto Parts owner; 65
TEWKSBURY – Kenneth A. Wing Jr., age 65, a well-known Tewksbury businessman, died unexpectedly Wednesday morning, October 30, at Southern N.H. Medical Center, from an apparent heart attack in his Hudson residence during the night. He was the beloved husband and best friend of Eleanor M. “El” (Letteri) Wing, with whom he had celebrated a twenty-year wedding anniversary this past June 30.
Ken was born in Newport, Rhode Island in September 1954, one of five children of Dolores (Rebel) Wing of Woburn and the late Kenneth A. Wing Sr. He was raised in Woburn and graduated from the Northeast Metropolitan Regional Vocational Technical High School in Wakefield.
Ken and his wife owned and operated Wing’s Used Auto Parts on Shawsheen Street in Tewksbury.
Ken, an out-of-doors man, was a Harley-Davidson enthusiast - his dog’s name is Harley-Davidson, a faithful N.A.S.C.A.R. fan, a National Rifle Association member, and member of the Hudson N.H. Fish and Game Club.
Besides his wife and mother, he leaves siblings; Ronald and Teresa (Keehn) Wing of Woburn, Christina Wing and her significant other, Joseph Coakley of Dracut, Jeffrey Wing of Woburn, and Matthew Wing of Windham, NH; his father and mother-in-law, Robert and Eleanor (Strong) Letteri of Tewksbury; brother-in-law, Robert Letteri and his wife Rose of Brookline, NH, sister-in-law, Karen Hayward and her husband John of Andover, many nieces and nephews; and numerous close friends throughout eastern Massachusetts and Southern NH.
Visiting hours Sunday, Nov. 3, from 1:00 to 4:00 p.m. in the Tewksbury Funeral Home, corner of 1 Dewey and 975 Main Sts. (Rte. 38) TEWKSBURY CENTER, Ph. (800 in MA or 978) 851 2950. His Funeral Service will follow at 4:00 p.m. on Sunday. Memorials to M.S.P.C.A. Nevin’s Farm, 400 Broadway, Methuen, MA 01844 are encouraged. visit: tewksburyfuneralhome.com

The following were notes from Eleanor to be used during his Eulogy:

Ken was the most sincere and loving person, he will be lost, but always remembered and never forgotten forever, till we all get a chance to meet him again in heaven, not rushing it though, he would want all of us here to remember him and to have a happy, full, safe and long and healthy life.
Ken was the most kindest of the kind and would do anything that he could for anyone that came into contact with him.
Ken was very respected and a completely sincere person that would make people laugh all the time and would make you smile.
Ken was married for 25 years to his beautiful, smart, loving caring wife. Eleanor, who is going to miss him more than anything in world, he would do anything and everything for her and she to me, but she doesn’t think she can make it without him. Such as driving them to work, pumping the gas (which she hasn’t done in a very long time), take care of the food shopping, taking out the trash, cooking on the grill, he just wouldn’t let her do anything he was her WORLD, she said he was the king of her world of her life and she also said there are tears all over her keyboard typing this.
Ken’s passions in life was his loving Wife Eleanor, his business, traveling to Aruba, Sturgis, Las Vegas and more. He was an enthusiast to Harley Davidson motorcycles and owned more than one, Hot Rod cars, big bad boy trucks along with his 40’ motor coach to go to NASCAR Racing in Loudon for the races - never missed one, as well as his sports favorite sports, Patriots football, Bruins Hockey, Red Sox baseball.
Ken loved his beautiful home which over the past 20 years had made many changes, updates and many additions added to it and made into our castle which he shared with me and our beautiful dogs.
Ken was a very responsible man with a beautiful smile.
Ken had many friends and acquaintensens any place, state, and other ventures we went on. It’s amazing no matter where we went someone would know him/us.
Eleanor said this was unexpected, and is grieving terribly which will never end. She said she just wants to bring him with home with her.
- Eleanor Wing