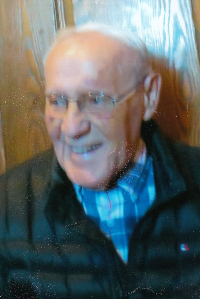 He leaves a daughter, Marlene A. Proulx of Webster; a son, Leonard A. Richard of Oxford; 3 grandchildren; a brother, Jean-Louis “Jimmy” Richard of Southbridge; nephews and nieces. He was preceded in death by a brother, Normand Richard and by 4 sisters, Emeria Grzembski, Bertha Bonneau, Gertrude Sherbert and Cecile Ohop, by his son-in-law, Paul R. Proulx and by his grandson, Christopher P. Proulx.

He was born and raised in Southbridge, the son of Euclide and Yvonne (Poirier) Richard. He attended Cole Trade School in Southbridge.

He was a World War II Navy veteran. He was a life member of the Webster-Dudley American Legion Post #184 and a member of the Polish American Veterans.

Mr. Richard worked for over 20 years as a lens polisher at the former American Optical Company in Southbridge. He then became the paint shop foreman at the College of the Holy Cross in Worcester. He was the custodian at Saint Joseph Basilica before his retirement in 1989.

He was a daily communicant at Saint Joseph Basilica, where he volunteered as the sacristan and as a Eucharistic minister. He opened and closed the church every day for the last 40 years. He belonged to the Holy Rosary Sodality and the Sacred Heart Society. He was a charter member of the Saint Joseph Basilica Knights of Columbus Council #12980 and also a fourth degree knight at the Cardinal Wright Assembly in Worcester.

He was a life member of the B.P.O.E. Elks, first in Southbridge Lodge #1864 where he served as exalted ruler in 1963 and then in the Webster Lodge #1466 for many years before it merged with Auburn Lodge #2118 several years ago.

His funeral will be held Saturday, November 2, from the Sitkowski & Malboeuf Funeral Home, 340 School St., with a Mass at 10:00 AM in Saint Joseph Basilica, 53 Whitcomb Street. Burial will be in St. Joseph Garden of Peace, with military honors provided by the Webster-Dudley Veterans Council. Visiting hours will be from 5:00 to 8:00 PM on Friday, November 1, in the funeral home. Donations in his name may be made to Saint Joseph Basilica, 53 Whitcomb Street, Webster.