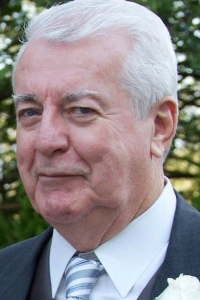 Thomas A. “Coach” Keough, 81, of Franklin died October 29, 2019 at Timothy Daniels House following a long illness. He was the husband of the late Maureen A. (McCleary) Keough for 47 years.

Born in Framingham, May 23rd 1938, the son of the late Harold and Agnes (MacGinnis) Keough. Tom was raised in Millis and had resided in Franklin since 1970.

Tom graduated with a BA from Boston College before earning his masters from Boston State. He began his career at Holliston High School where he taught for 40 years. He was also the basketball coach for HHS for 32 years before continuing his coaching career in the MASS AAU program for over 20 years. For his dedication to the sport, Coach Keough was inducted into the Massachusetts Basketball Coaches Hall of Fame.

He had a great love of basketball and history, but more importantly, for his students and players; he enriched the lives of many. In addition, he worked for many years at Glen Ellen Country Club, Sabina Doyle’s/Mickey Cassidy’s and Paramount Industries, gaining many long-lasting friendships.

He enjoyed teaching the fundamentals of basketball and life, helping others, and cheering on his beloved BC Eagles and local professional sports teams, albeit usually on tape delay. He also treasured spending time with his family and friends, always willing to listen and offer support.

He is survived by his children, Mary Kate Keough of Slatersville, RI, Thomas M. Keough of Uxbridge and Beth Keough of Franklin, along with his prized grandson, Thomas Harris “Harry” Keough. He is also survived by his siblings, William Keough of East Dennis, Kathleen Keough of Medway, and brother in law, Alfred Souza of Freeport, ME, and predeceased by his sister Barbara Souza and sister in law, Carol Keough. Along with his many nieces, nephews and cousins, Coach was cherished by many whom he also called his kids.

His funeral will be held on Tuesday, November 5th at the Ginley Crowley Funeral Home,(www.ginleyfuneralhomes.com) 3 Barber Street, Medway at 9:30am followed by a funeral Mass at St. Thomas the Apostle Church in Millis at 10:30 a.m., where he served as an altar boy in his youth. There will be a burial immediately following at Prospect Hill Cemetery. Calling hours will be on Monday November 4th from 4-8 p.m.

In lieu of flowers, expressions of sympathy may be made in his memory to the Hoops For Hope Foundation. https://www.hoopsforhopefoundation.com/