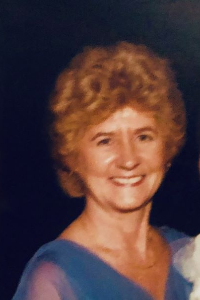 Elizabeth Joan (Gorman) MacDonald (age of 88) beloved mother, grandmother and friend, peacefully passed away early Monday morning at her home in South Weymouth on October 21, 2019. Her family was by her side throughout her final days providing her comfort, love and wonderful reminders of all her favorite things- including her love of birds, flowers, kitty cats, Downtown Abbey and Barbara Streisand music. As per her wishes, her immediate family gathered together for dinner to celebrate her life, in lieu of formal services. Elizabeth proudly donated her body to Harvard University and will be later cremated.

She was preceded by her former spouse, Douglas Richard MacDonald Sr; her parents Helen (Mitchell) Gorman and Vincent Gorman; her brothers - Charlie, Jack, and Bill Gorman as a well as her dearest friends, Paul and Betty Gillis.

Elizabeth was affectionately known to her family and friends as ”Betty”. She was born and raised in Cambridge MA. She graduated from Cambridge Latin High School after which she began an extensive career in Banking. Betty worked exclusively for South Weymouth Savings Bank for 20 years - starting as a clerk in the mortgage department, and quickly worked her way up to Mortgage Supervisor then Branch Officer. After graduating from the National School of Finance and Management at Fairfield University in 1986, she was promoted to Assistant Vice President/ Head of Personnel and remained in that position for five years until retiring. During her tenure, Betty was very proud of mentoring other women with their careers and leaves behind a generation of confident, talented women in the Banking industry.

Betty stayed very busy during her retirement years and played an invaluable part of raising all her grandchildren which brought her great joy reading books to them, helping with homework, cooking Sunday dinners, and trips to the beach or playing sports/games together. She also led an active role on the Board of Trustees for her Condo association and remained an active member from 1993 to 2009. She loved her home and her neighbors- especially her dear friend Janet Parisi, whose love and support throughout the years brought her great comfort. Janet known for her talent rescuing feral cats introduced Betty to the rest of the Quincy Animal Shelter gang (Peg O’Brien and Margaret Kinsella). Together, they became fast friends known as “The Foxy Ladies”-after their many memorable trips to Foxwoods Casino. Betty also loved to watch all the Boston Sports teams with playoffs and championship battles lasting into the wee hours of the night. She was delighted to attend all her grandchildren’s events, award ceremonies and games. She treasured being able to keep in touch with her childhood friends, especially Barbara Boudreau and Doris Nolan from Cambridge who could still make her giggle and were her “partners in crime” on their trip to Vegas in 2004.

Betty loved life and lived it on her own terms. She was extremely proud of her kids and grandchildren and felt very blessed to have a wonderful neighbors, family and friends throughout her amazing life. In lieu of flowers, donations can be made as a show of sympathy in her name to Hospice of the South Shore 30 Reservoir Park Dr., Rockland MA 02370.