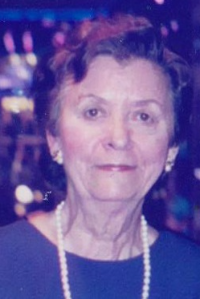 Dudley
Jennie (Kyritse) Manthos, 88, of Dudley passed away Wednesday, October 30, 2019, in the comfort of her own bedroom with her two loving, devoted daughters at her constant side.
Throughout her over nine years of illness, her daughters fed and cared for her daily, showering her with their love as she had done for them.
Jennie was born in Uxbridge, MA. on June 25, 1931 to Philip and Thomais (Papaspirou) Kyritse. Her father immigrated to the United States from Thessaloniki, Greece with two cousins to find work in the Douglas and Uxbridge woolen mills.
Before entering kindergarten, Jennie’s mom became homesick for her family in Greece, so she took Jennie and her baby sister here for a visit while her husband remained in the U.S. to work.
Jennie attended school in Greece until WWII began. Stuck in Thessaloniki with a father to provide and protect them, Jennie witnessed unspeakable atrocities.
The Nazis invited northern Greece and began to round to round up the Jews for deportation. Her neighbors were Taken away by trains. People were hung in the town’s square as an example to those who were defiant.
Food was scarce and the family survived on greens that Jennie picked from the mountainside. Her uncle Jordan owned a bakery and would portion a little flour from each of his customers to make them a loaf of bread every day.
Bombs fell daily and she ran with her baby sister to hide in caves for protection. The Nazis took over her family home as headquarters. Because Jennie was an American, her dad contacted the American Red Cross who after a few years was able to secure the families safe return to the United States on the ship Marine Shark.
Jennie found school very difficult when returning to the Uxbridge school system. Lacking bilingual programs, she relied heavily on the kindness of her teachers. Her favorite subject was English, taught by her favorite teacher Miss Quinn. Years later at her cousin’s wake,
Jennie was thrilled to see Miss Quinn and introduce her daughter Leslie, also an English teacher.
Education was a priority to Jennie, and she stressed it to her two daughters. A’s were expected from them. Trips to the town library were done twice a week for free reading books. Television was allowed for an hour or so only on Friday through Sunday evenings.
College was a given. Becoming financially secure was her goal for her daughters.
The teachings of the Greek Orthodox Church were the center of her life. She served for many years as a Sunday school teacher and as a hard working church festival participant. She was an active member of the Philoptochos Society, acting for many years as the chair of the
Sewing/craft booth for the society’s annual bazaar. Her favorite saint was the Virgin Mary.
She met her beloved husband John of 46 years in church on Easter Sunday when he was on leave from the Navy.
Jennie was an accomplished gardener. She had a huge vegetable garden and canned its harvest to feed her family. She tended her red petunias that adorned the front of her home every summer. She loved to bake. She made orange or chocolate chip chiffon cakes for
Family birthdays, homemade crème puffs for holidays, as well as rice puddings. Her Greek desserts were also delicious.
She will be eternally missed by her daughters; Leslie Manthos and Laurie Manthos, DMD, both of Dudley; a sister. Alkmene and her husband Peter Gaba of Berlin; three nieces and a nephew; and many grandnieces and grandnephews. She was predeceased by her loving husband John in 2004.
Visiting hours will be 4-7pm on Friday, November 1, 2019 at the ROBERT J. MILLER FUNERAL HOME and LAKE CHAPEL, 366 School St., Webster. A Trisagion Service will be at 5 pm in the funeral home.
The Funeral and burial will be private and at the convenience of the family.
In lieu of flowers, the family asks that donations be made in Jennie’s memory to: St. Jude’s Children’s Research Hospital, 501 St. Jude Place, Memphis, TN. 38105 or Sts. Constantine and Helen Greek Orthodox Church, P.O. Box 713, 37 Lake Parkway, Webster, MA. 01570.
To leave an online message of condolence, please visit: RJMillerfunerals.net