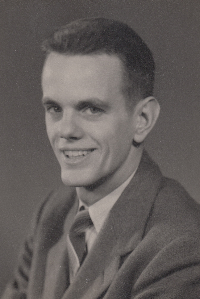 He leaves 3 children, Bruce B. Craver and his wife Diane of Greenland, NH, Carolyn E. Richardson and her partner Jason Hallock of Manchester By The Sea, MA, and Melinda B. “Mindy” Craver and her fiancé Tom Walsh of Sedona, AZ; 4 grandchildren; 10 great-grandchildren; 2 sisters-in-law, Elizabeth Craver of Maine and Audrey Craver of Florida; a brother-in-law, Windsor Bigelow, Jr. of Charlton; nephews and nieces. He was preceded in death by his 3 brothers, Perry, John and Edgar “Ted” Craver.

He was born on June 28, 1923 in Worcester and raised on Crosby Street in Webster, the second son of Edgar A. and Marjory P. (Parsons) Craver. He graduated from Bartlett High School in 1940 and then from Dartmouth College. He later earned a Masters Degree in Education from Fitchburg State University. He resided in East Longmeadow, Foxborough and then in West Falmouth for 31 years, returning to Webster in 2013.

He was a United States Marine Corps Veteran of World War II. Serving as a sergeant, he saw action at Okinawa.

Mr. Craver was a sixth grade teacher in the Foxborough School System for 24 years.
He belonged to Saint Mark’s Episcopal Church in Foxborough and then to Saint Barnabas Episcopal Church in West Falmouth. He loved outdoor sports including sailing, skiing, golf and tennis and was still active on the links this past summer. He belonged to the Webster Sailing Association and the Pine Bay Association in Falmouth for many years.

His funeral will be held on Sunday, November 3, at 2:00 PM in the family home at 179 Schofield Avenue, Dudley, with the Rev. John R. White officiating. Burial will be in Perryville Cemetery, Dudley, with the Webster-Dudley Veterans Council providing military honors. Donations in his name may be made to either Care Dimensions Hospice, 75 Sylvan St., Danvers, MA 01923 or to the Webster-Dudley Veterans Council, 3 Veterans Way, Webster, MA 01570. Arrangements are under the direction of Sitkowski & Malboeuf Funeral Home, 340 School Street, Webster.