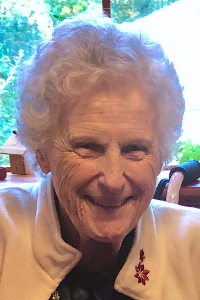 Mrs. Burke was a graduate of Ipswich High School Class of 1949. She moved to Franklin, MA over sixty years ago. Mrs. Burke worked for GTE for over twenty years as an administrator, and held a top secret clearance while working for the company.

When her children were young, she aided in organizing the first Pop Warner cheerleading squad in Franklin. She was an avid artist including sewing, knitting, playing the piano, gardening, bird-watching and especially painting. She painted using many mediums and loved to paint landscapes. She enjoyed getting special requests for her artwork and the connection with people that came with that. She had many life-long friendships and enjoyed playing Rummikub with her best girlfriends very late in life. She spent time at the Franklin Senior Center as well. Most important to her was always spending time with her loved ones. She was a proud mother, grandmother and great-grandmother.

Burial will be in Union Street Cemetery, Franklin.

Calling hours will be on Tuesday, October 29, 2019 from 5PM to 8PM. Relatives and friends are cordially invited.