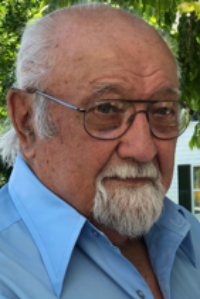 FALL RIVER… Leonard V. Gomez, 86, of Fall River passed away peacefully October 26, 2019 at Charlton Memorial Hospital.
He was the loving husband of the late Ida S. (Silvia) Gomez and the former husband of the late Helen D. (Kaye) Buckley.
Born in Fall River, he was a son of the late Manuel and Serena (Ramos) Gomez.
Mr. Gomez had worked as a driver for Viti Mercedes-Benz, as a truck driver for Cal’s Trucking and as a mechanic for Gell’s Motor Sales. He was a member of New England Teamsters & Trucking. Len was a collector of many things but most of which were trains, John Deere memorabilia and lighthouses and enjoyed going on long drives. He used to restore antique engines and bring them to local fairs and shows. Every day in the morning and the evening, Len would meet with friends at McDonalds to socialize and he truly enjoyed their company. As the patriarch of his family, he was thoroughly excited to have met his great great granddaughter and being part of 5 living generations of his family. His grandchildren, great grandchildren and great granddaughter made him proud.
Survivors include his children: Kathy A. Waite (husband: Doug) of Tiverton, Donna I. Silva of Little Compton and Bryan L. Gomez of Little Compton; his grandchildren: David A. Miranda (wife: Holly) of Fall River and Scott A. Miranda (wife: Suzie) of North Providence; his great grandchildren: Hayley, McKenna, Kyla and Jaden; his great great granddaughter: RaeLynn Olivia; his siblings: Francis Rogers of Little Compton, Albert Gomez (wife: Janice) of Little Compton and Richard Gomez (companion: Selena) of Little Compton; several nieces & nephews. He was the brother of the late Leo A. Gomez and brother-in-law of the late Henry Rogers.
Funeral service to which relatives and friends are invited will be held Wednesday, October 30, 2019 at 7 PM at South Coast Funeral Home, 1555 Pleasant St. Fall River, MA 02723. Cremation will follow. Calling hours will be held Wednesday from 4 – 7 PM, prior to the service.