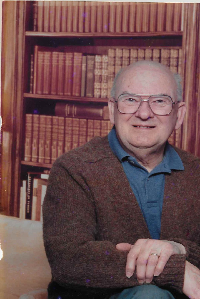 After a long well-lived life, Kenneth Lane Adam passed away Oct. 23, 2019, with the comfort of his family near. Kenneth was born Oct. 25, 1925, in Wethersfield, the son of Kenneth A. Adam and Ethel May (Lane) Adam. Kenneth grew up in Wethersfield, graduating from Wethersfield High School. He attended a year of post graduate classes at Tilton School in New Hampshire. He enlisted in the Army in March 1944, serving until 1946, in the Quartermaster Corps in France during World War II.

After the war, he entered Babson College and received a Bachelor of the Arts degree in Business Administration. He married Nancy Jean Wahlberg in June 1949 in West Hartford, where they resided. Their two children, Lane H. Adam of Campton, N.H. and Deborah Jean Adam and her husband, Cameron Bortz of Groton, survive Kenneth.

Kenneth worked in office administration positions in various manufacturing companies in the Hartford area. In retirement, Kenneth and Nancy moved to Noank and Kenneth opened an antique and second-hand furniture store in Old Mystic. They later moved to Groton Long Point to Nancy’s family home. Kenneth became the caregiver for Nancy as her health failed until her death in 2007.

Kenneth was like so many of his generation, having their youth formed by the Great Depression and World War II. He never wasted anything useful and learned how to fix, repair and re-use most anything. One of his hobbies was genealogy, for which he has left a comprehensive record for future generations. He has very proud of his deep New England roots being a Mayflower descendent. Kenneth was very influential in his grandchildren’s life. Mariah Lea Pfiffner and Wesley Adam Pfiffner.

His family will miss him, while quiet and steadfast, he had a dry sense of humor. In his declining years, Kenneth received wonderful care and companionship from Karen Moretta Marcoux. In the last years of his life, he lived at Apple Rehab Center in Mystic where he received compassionate and skillful care. Hats off to all staff who work so hard taking care of the elderly and sick.

In lieu of flowers, if you wish, please donate to an animal shelter of your choice or to St Mark’s Church in Mystic CT.