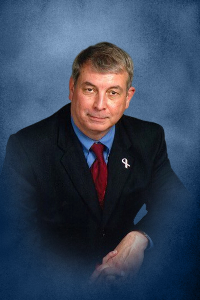 Judge Ben Brinson, age 65, entered into rest suddenly while attending a training conference in Athens on Wednesday, October 23, 2019.
An “Army brat”- Judge Brinson, along with his twin brother, was born in Honolulu, Hawaii the son of the late LTC Remer Young Brinson II, USA, Ret., and Shirley Blitch Brinson. Judge Brinson received his undergraduate and Juris Doctorate degrees from the University of Georgia, and has been a partner at Callaway, Neville & Brinson since 1985. He served as a Municipal Court Judge for the City of Claxton, Hagan and Collins, and he was the Assistant Solicitor General of Evans County State Court.
In 2000, he was one of three juvenile court judges appointed to the Atlantic Judicial Circuit. Judge Brinson was a humble servant to the communities he served, but recently commented how honored he was to have served nearly 20 years on the juvenile court bench. He was appointed to the Executive Committee of the Council of Juvenile Court Judges in 2012- the governing body of the Council that is responsible for the management of its business and policies throughout the year.
He was also committed to the betterment of the bench. He was a longtime Chair of the Council’s Education Committee which sets the educational seminars for judges. Additionally, he served for many years on the Board of Trustees of the Institute of Continuing Education which conducts the educational seminars for all the judges of the State. He served on other standing committees of the Council as well.
He proudly became President of the Council of Juvenile Court Judges in 2016-17 in which he worked tirelessly alongside his colleagues to provide support and guidance to the juvenile court judges of the State. Additionally, during his term legislation was proposed to raise the salaries of juvenile court judges of the state- specifically the judges serving rural Georgia.
During the last eight years, Judge Brinson lobbied to have the superior court judges of the adjoining judicial circuit, Ogeechee, appoint juvenile court judges. He had many meetings with the superior court judges there, many of whom he practices law in front of, and finally in June of 2019, the judges appointed two part time juvenile court judges. The Ogeechee Judicial Circuit was the last out of 49 circuits in the state not to have any juvenile court judges.
Judge Brinson was a faithful and devoted member of Eastside Baptist Church in Claxton where he served many years as Treasurer, overseeing the budget and capital campaign that paid off the building fund ahead of schedule. He was dedicated to the Men’s Ministry and his Sunday School class, and on Wednesday evenings Judge Brinson could always be found preparing supper for the youth ministry. He was mission oriented including a recent trip to Haiti. Judge Brinson was a true servant of the Lord and of his community.
In addition to his parents, he was preceded in death by his daughter, Loraine Womble.
He is survived by his two sons, Larry Summerlin (Jenny) of Canton and Jeremiah Womble (Amy) of Statesboro; grandchildren, Issac, Jared, Grayson, and Katie Summerlin, Auri and Evie Womble; aunt, Mary Ann Brown of Twin City; brothers and sisters, William Holton Brinson (Ruth Lewis Brinson) of Augusta, Virginia “Ginger” Dobbs (John H.) of Grovetown, Carol Tuten (Ray) of Lincolnton, and Remer Y. Brinson III (Laura Curley Brinson) of Augusta; nieces and nephews, John H. Dobbs, Jr. (Paige), Ashley T. Holmes (Matthew), Matthew G. Dobbs (Erin), Amanda T. Karp (Mike), Christopher Tuten, Lewis Brinson (Sara Beth), Lauren McFadden (Will), Remer Brinson IV (Kelly), and Holton Brinson (Anne); as well as many loving great nieces, great nephews, cousins, colleagues, and friends.
The family will receive friends from 12:30 P.M. until 2:00 P.M. Monday at the ROC of Eastside Baptist Church in Claxton.
A Celebration of the life and service of Judge Brinson will take place at 2:00 P.M. Monday, October 28, 2019 at the ROC of Eastside. His close friend and Pastor, Dr. Matt C. Brady will officiate. Interment will follow in the Brinson Family Cemetery near Twin City.
Along with his nephews, his cousins Eddie Brown, Pierce Blitch, David Brown, and Mark Brown will serve as Pallbearers. The attorneys and staff of Callaway, Neville, and Brinson will serve as Honorary Pallbearers; and all additional members of the judicial and legal professions will sit together as a group.
Judge Brinson had a true heart for children and the family asks that memorials be directed to Families 4 Families in care of Sharon Ramsey, 3915 Harrison Road, Suite 500, Loganville, GA 30052; or to Eastside Baptist Church, 108 South Peters Street, Claxton, Georgia 30417.
Please sign the guestbook and send condolences at,
www.plattsfuneralhome.com
PLATT'S FUNERAL HOME
337 North Belair Road Evans
(706) 860-6166