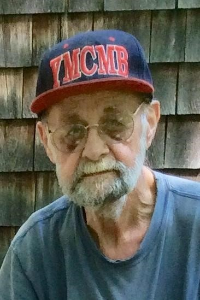 Donnie was born on October 25, 1944, in Laconia, NH, the son of the late Malcolm and Vivian (Bailey) Newton.

Donnie went to Laconia schools and then went to work in construction before he worked for L.M. Pike and Sons, paving, for many years where he perfected his skill as a roller operator for which he was very proud.

Donnie loved the outdoors and enjoyed fishing, camping, and hunting, to name a few. He also was an avid fan of the Boston Red Sox and had a passion for doing jigsaw puzzles which he would glue together and frame as gifts for his friends. He also was very clever with his mechanic skills and got pleasure out of fixing different things for everyone. In his later years, he enjoyed visiting with his relatives and going to Maine to stay with his son for days so he and his dog Lucky could relax and enjoy the outdoors.

Donnie is survived by his inseparable dog Lucky; his only son, Donald W. Newton of Biddeford, ME; two daughters, Tammy Desrosiers of Biddeford, ME and Bobbi-Jo Turcotte of Belmont, NH. Also surviving him are two brothers, Stanley M. Newton of Belmont, NH, Ralph E. Newton of Dover, NJ; three sisters, twin sister, Donna S. Gilbert of Chichester, NH, Priscilla M. Lachance of Belmont, NH, and Linda Cournoyer of Gilmanton, NH; eight grandchildren and several nieces and nephews. In addition to his parents, Donnie was predeceased by his sister, Sylvia.

With respect to Donnie’s wishes, there will be no calling hours and there will be a private gathering of his family on November 3, 2019.

If you’d like to express condolences, please send to his daughter, Tammy Desrosiers, at 64 Breton Avenue, Sanford, ME 04073.

Wilkinson-Beane-Simoneau-Paquette Funeral Home & Cremation Services, 164 Pleasant Street, Laconia NH is assisting the family with the arrangements. For more information and to view, an online memorial, go to www.wilkinsonbeane.com.