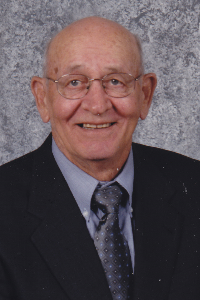 Ronald L. "Ronnie" Etherington, 85, of Anderson, died at his residence after a brief illness.
He was born December 20, 1933, in Marion, the son of Eugene and Kathrynn (Maynard) Etherington. Ronnie graduated from Anderson High School in 1953. He won Third place in the State Cross Country meet in 1953 where he ran it barefoot.
He worked for the City of Anderson Light and Power for 35 years before retiring in 1991. He was a member of International Brotherhood of Electrical Workers over 60 years. He enjoyed fishing, golfing, traveling, running track and was an all-around sportsman. He enjoyed watching his grandchildren play sports and was a dedicated family man.
Ronnie is survived by his wife, Patty L. (Barker) Etherington whom he married June 12, 1953 in Anderson; his daughter, Rhonda (Paul) Williamson of Anderson and his son, Michael Lee (Sharon) Etherington of Pendleton; five grandchildren, Joshua (Sasha) Williamson of Colfax; Michelle (Amos) Taylor of Pendleton; Kaylyn Etherington of Anderson ; Devin (fiancé Devin) Etherington of New Jersey and Brayden Etherington of Pendleton; seven great-grandchildren Lily, Dane, Isaac, Isabel, Layla, Sigma and Chloe; several nieces and nephews.
He was preceded in death by parents and his brother, Keith Etherington.
Service will be at noon on Saturday, October 26, 2019 at Rozelle-Johnson Funeral Service with Paul Williamson and Amos Taylor officiating. Burial will follow at Anderson Memorial Park Cemetery.
Visitation will be held two hours prior to the service Saturday.
Memorial contributions may be given to the charity of the donor's choice.
The family would like to extend a special thank you to St. Vincent Hospice especially Natasha, Jesika and Kelly for all of their loving care and support.
Rozelle-Johnson Funeral Service handled funeral arrangements.
Post online condolences at www.rozelle-johnson.com