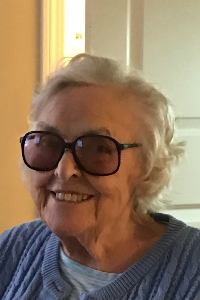 …former secretary at L.G.H.; 91
TEWKSBURY – Mary W. (Kirmes) Barnoth, age 91, a former Medical Secretary, died peacefully Sunday morning, October 20, at Billerica Crossing after a four month decline in health. For thirty-five years, she was the wife of Frank A. Barnoth, who passed in 1993.
She was born in Melrose, one of four daughters of the late Christopher and Annie (Cloonan) Kirmes, and raised in the Melrose Wakefield area. After her marriage, she and Frank lived in Somerville before settling in Tewksbury in 1958, where they raised their family. After Frank’s passing in 1993 she moved to Hampton, NH in 1997.
She worked at Lowell General Hospital as a Medical Secretary which she enjoyed her whole career. She was called back to work four times during her retirement and worked well into her 70s. She had a love for cooking and would feed anyone whether they were hungry or not. She had a passion for animals of all kinds and adopted many throughout her life. She leaves four children, Kathryn Carbone of Wilmington, Elizabeth Briggs and her partner Thomas Landry of Tilton, NH, Frank A. Barnoth Jr. of Hampton, NH, and Christine LaRosa and her husband Weston of Billerica; five grandchildren, Frank Barnoth III and girlfriend Julie of Tewksbury, Dominic Carbone and wife Jeri of Lowell, Julieann Buchanan and husband Ryan of Londonderry, Jacqueline, and Elena of Wilmington. She leaves three great grandchildren Madelyn and Josephine Buchanan and Logan Barnoth; several nieces and nephews; and was predeceased by her sisters, Elena Hupprich, Helen Barry, Ruth Francis and her son in law Thomas Carbone.
A Memorial Graveside Service will be held Thursday, October 24, at 1:30 p.m. in Tewksbury Cemetery. In lieu of flowers, memorials to M.S.P.C.A. Nevins Farm, 400 Broadway, Methuen, MA 01844 are encouraged. Arrangements are through the Tewksbury Funeral Home. Visit:tewksburyfuneralhome.com