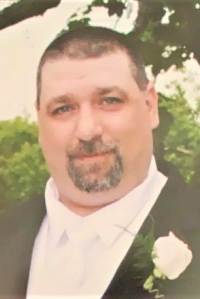 FALL RIVER… Douglas J. Arruda Jr., 43 of Fall River passed away Tuesday, October 15, 2019 at St. Anne’s Hospital.
He was the loving husband of Hilda (Reis) Arruda.
Born in Fall River, he was a son of the late Douglas J., Sr. and Deborah (King) Arruda and had been a lifelong resident of this city.
Mr. Arruda was a communicant of Espirito Santo Church in Fall River and had enjoyed working with his hands and cooking. He was an avid Green Bay Packers and New York Yankees Fan and above anything else, loved his wife and children.
Along with his wife, survivors include his daughter: Destiny A. Arruda of Fall River; his sons: Michael D. Arruda (companion: Hannah E. Rodrigues), Matthew V. Arruda and Ivan A. Santiago, all of Fall River; his brothers, Michael J. Marum of Somerset, Christopher Yost, Eric Arruda, Wayne Yost, Jeremy Yost and Wesley Yost, all of Fall River and Edward Ryan, Jr. of Vermont; his paternal grandmother: Louise Beaulieu of Somerset; several nieces and nephews. He was the brother of the late Michael P. Arruda.
Service to which relatives and friends are invited will be held Sunday, October 20, 2019 at 6 PM at South Coast Funeral Home, 1555 Pleasant St. Fall River, MA 02723. Cremation will follow. Calling hours will be held Sunday from 5-7 PM.