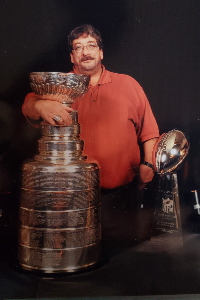 
Michael J. Accomando Jr., 58, of Derry, NH, died Sunday October 13, 2019, in Portsmouth Regional Hospital, Portsmouth, NH. He was born in Boston, MA on August 29, 1961, a son of Michael Sr. and the late Alberta (Pecora) Leary. Although working as the operations manager for TD Garden took up much of his time Michael always made time for his great grand kids and pleasant fishing trips.

In addition to his stepfather, Thomas Leary of Florida, Michael is survived by his beloved wife of 28 years, Marilyn Dube of Derry; four stepchildren; thirteen grandchildren; many great-grandchildren and his nephew, Warren Johnson.