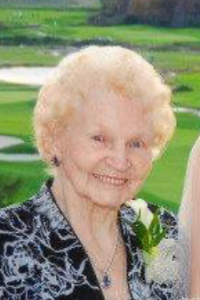 Agnes M. (Lamphier) Clark, a longtime resident of Saugus and formerly of Charlestown and Malden, entered into eternal life on Monday, October 14, 2019 at Adviniacare of Wilmington Nursing & Rehabilitation in Wilmington. She was 98 years of age.

Agnes was born in Malden on June 28, 1921, a daughter of the late Edward A. Lamphier and Mae (Bonning) Lamphier. She grew up in Malden where she was educated throughout the Malden Public School system. Agnes worked as a cashier for several years in several retail stores in the area. She was also a homemaker who dedicated herself to the care of her husband, children and extended family. She enjoyed knitting and taking care of her cat.

Agnes is the beloved wife of the late Walter A. Clark. She is the devoted mother of Margaret "Peggy" Doherty and her husband Thomas of Saugus, Michael Clark of Middleboro, Robert Clark and his wife Deborah of Dexter, Maine and Patricia "Patty" Figucia and her husband Frank of Nashua, New Hampshire. She is the loving Grandma to her 9 grandchildren, 16 great-grandchildren and 9 great-great-grandchildren. She is the beloved sister of the late Helen Donahue, Margaret Doherty, Lillian Wheeler, Edward Lamphier, Aldred Lamphier and Joseph Lamphier. She is also survived by her many loving nieces and nephews.

Relatives and friends are invited to attend Agnes's visiting hours on Friday morning, October 18, 2019 from 10 A.M. to 12 Noon followed by her Funeral Service at 12 Noon in The Carr Funeral Home, 220 Bunker Hill St. Charlestown. Her burial will be at Woodlawn Cemetery in Everett.