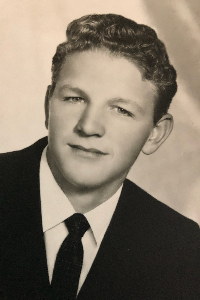 
It is with great sadness and tears we announce the passing of John William Schab, the Hero to our family and many friends.
John passed away October 12, 2019 in Kennewick from complications related to Dementia. His loving wife Kathy and his sons, John and Jim were by his bedside.
John was born November 29, 1943 in Yakima, WA to Andrew and Jennie Schab. John grew up on the family farm in Benton City, WA. He attended schools in Benton City graduating with honors from Kiona-Benton High School in 1962.
With his Father passing away in 1957, John assumed the responsibility of being the “man of the household” at age 14 and held that position to the end. When time allotted he made it a point to attend sporting events, banquets and school events for his brothers and sisters. He was a member of Ki-Be Boosters.
John was employed at Twin City Foods (aka Prosser Pack), for 42 years retiring in 2005 as Head Mechanic, all the while helping his Mother with general operation of the family dairy farm. He loved all animals, especially dogs, cats and cattle. He always had a dog with him, a common sight of a traveling companion in the cab of his pickup sitting right next to him or riding in the back barking all the way. Neighbors knew when John was on his way to the farm or heading back home. Also, it was an alarm to family members and
workers to be doing their chores!
John married his companion of 21 years, Kathy Graff, in May 1998. He loved his family unconditionally, taking great pride in not only watching his sons, grandsons and granddaughters play sports, but also coached grid kids football. He also was in the grandstands at home games and many away games. You would also see him at ballet recitals for his granddaughters.
John did take time from work and loved going to The Cabin, whether it be to just relax by a fire, watching the water flow by in the river, wood cutting, fishing, snowmobiling in the winter, or visiting with family, friends and especially the “Boys Only” week with his High School buddies. He enjoyed a special Alaskan Fishing trip in 2010 with his 3 sons, steelhead fishing on the Columbia River, Mariners Spring Training in Peoria, AZ, family trips to Lincoln City, Mexico and Arizona with Kathy.
His hobbies included restoring his first car, 1956 Chev BelAir and 1950 John Deere tractor. He played recreation softball and really enjoyed the Twin City Foods annual rivalry games against the West Side operation.
John was preceded in death by his son, Robert J Graff, his parents, Andrew and Jennie Schab, his siblings, Richard, Donald, Marie, Clarence, Raymond, Clemance, Walter, Harold, Robert, Florence, Andrew(Bud), Lorraine, Curtis, and Betty.
John is survived by his wife, Kathy, sons John Wayne (Marla) and Kermit James. His siblings, Margaret, Tony(Kay), Ed(Bev), Andrea, and his honorary brother, Andy Church(Deb);Sister-in-laws, Devone Schab, Lenora Schab Cindy Schab and Christine Seyler (Scott); Brother-in-laws, Clayton Rayburn (Rhonda), Richard Frampton; and his grandchildren, Johnna, Chandra, Sara Horn (Vance), Jaymz, Johnathan (Lara), Auslyn, Asher, Tawnee Van Belle (Rylee), Teagan, Lanie, and Addison. Seven Great Grandchildren: Colin, Tylee, Colby, Lucas, Rustee, Rhetlee & Baby Van Belle;
His Mother-in-law, Geraldine Rayburn; and ex-wife Debbie Rucker; His blended family, Steve Graff(Dana), Robin Graff, Curtis Graff(Charla), Jeff Joyce(Jessica), 10 Grandchildren and 4 Great Grandchildren. He is also survived by several aunts and uncles; numerous nieces, nephews, cousins, in-laws, outlaws and many lifelong friends and co-workers.

John took pride in being a hard worker and accomplishing tasks expected of him; he in return expected the same and praised those who fulfilled those expectations. There was rarely anything that was broken that John couldn’t fix or put back together. If there was, Duck-Tape to the rescue!!

Special thanks to Squire Residence Adult Family Home in Kennewick, (Peter & Carrie Squires) and their Care Angels: Karla, Emily, Makayla, Bianca and Dalila; the Prosser Memorial Health staff, Dr. Hashmi and Dr. Joshi for the loving care given to John; also a very special thank you to Granddaughter Sara for being there for Papa.
In lieu of flowers, the family suggests memorials be made to Heartlinks (Hospice & Palliative Care) www.heartlinkshospice.org or local Alzheimer’s/Dementia Chapter, or volunteer at your local animal shelter.

Viewing will be held Friday, October 25, 2019, 4 pm to 8 pm at the Prosser Funeral Home. Celebration of Life will be at 1:00 pm on Saturday, October 26 at the Bethel Church in Prosser. Luncheon to follow service. You may leave a message for the family at www.Prosserfuneralhome.com