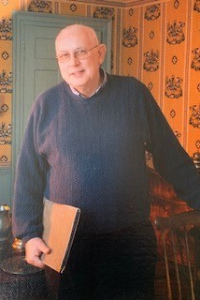 Don was born in Patterson, New Jersey and moved several times during his youth. He was a graduate of John Brown Junior High School (the best junior high in Toledo) and Libby High School, also in Toledo, OH. He graduated from Ohio University where he was a proud brother and president of the Tau Kappa Epsilon fraternity . He began his professional life as a high school teacher and later transitioned into educational publishing working for Holt Rhinehart and Winston, Houghton Mifflin and Charlesbridge Publishing. Upon his retirement, Don expanded his long standing work in the Andover community.

After moving with his family to Andover, Don became a member of the Andover School Committee where he served for ten years. He also served on Andover’s Finance Committee, Cultural Council, the Andover Sister Towns Association, the Andover Council on Aging, and was a valued board member and past president of Andover’s Center for History and Culture. Don was a strong supporter of the effort to renovate the Andover Senior Center, and an advocate for the Historic Mill District project. Two of his greatest joys were teaching history courses for the Andover Senior Center singing with the center’s chorus The Sunrise Singers. His devotion to the town earned him honors from the Rotary Club of Andover as an Andover Citizen Who Cares in 2006 and in 2008 he was presented with the Virginia Cole Community Service Award at Andover’s annual Town Meeting. Through all of this work, he found himself surrounded by dedicated individuals who became cherished friends.

Don was a member of the Merrimack Valley YMCA board of managers, the YMCA corporate board and sat on the YMCA camping services board as well. He loved volunteering at Camp Lawrence on Bear Island on Lake Winnepesaukee and was a driving force behind the efforts to renovate the camp’s kitchen. Don spent many joyful hours cooking for staff, taking walks with his dogs and enjoying the peace of the dining hall porch. In 1999, Don and his wife Vicky were inducted into the Camp Lawrence Hall of Fame for their devotion to the camp.

A celebration of Don’s life will be held on what would have been his 82nd birthday, Sunday, November 24th, 2019. Friends are invited to join Don’s family at Old Town Hall located at 20 Main Street, Andover, MA from 12:00 PM to 3PM.

In lieu of flowers, please consider making a donation to the Merrimack Valley YMCA or the Andover Center for History and Culture.
https://www.mvymca.org/get-involved/give/memorial-giving-2/ http://andoverhistoryandculture.org/give