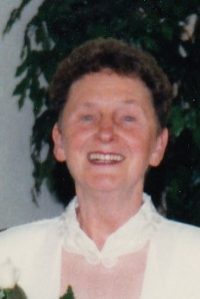 She leaves her daughter, Catherine M. Przybylek and her husband Robert of Webster; 2 grandsons, Jason P. Przybylek of Millbury and Paul R. Przybylek of Webster; a brother, Henry Latour, Jr. of Southbridge; a sister, Shirley Luce of Roanoke, VA; and several nieces and nephews.
She was preceded in death by her sister, Marcelene Jordan.

She was born and raised in Southbridge, a daughter of Henry Latour, Sr. and Emma (Chouinard) Latour. She lived in Webster for 48 years before moving to Holden in 2012. She attended a bible school in Virginia.

Dot worked full time in the kitchen at Hubbard Regional Hospital for several years and part-time as a sales clerk at the Hebert Candy Company in Sturbridge. She was a faithful member of the Holden Chapel. She was an avid jigsaw puzzle maker and enjoyed reading her bible. A highlight of her life was a two-week pilgrimage to the Holy Land.

With Dot, everything was about faith and family. She had a natural ability to minister to others.

Visiting hours will be held Thursday, October 17, from 4:00 to 6:00 PM in the Sitkowski & Malboeuf Funeral Home, 340 School Street, Webster, where a service will be conducted at 5:30 PM. Burial will be private in the Mass. Memorial Veterans Cemetery, Winchendon. Donations in her name made to The Holden Rehab & Nursing Center Activities Committee, 32 Mayo Drive, or to the Holden Chapel, 279 Reservoir Street, both in Holden, MA 01520.