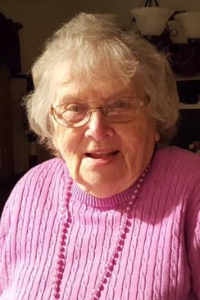 Janet S. Wallace, 94, of Londonderry, NH, passed away Saturday October 12, 2019, at her home surrounded by her loving family. She was born in Springfield, MA on May 21, 1925, the daughter of the late Albert and Lillian (Benson) Smith and had been a resident of Londonderry since 1997. In her younger years, Janet enjoyed dancing, was involved with the USO and donated her long hair for gunsights during WWII. On April 2, 1949 she married the love of her life Robert V. Wallace. She worked as an Auditor for Mass Mutual for 35 years. Janet enjoyed playing Bingo and going to Foxwoods. She was also a member of the Londonderry Senior Center.