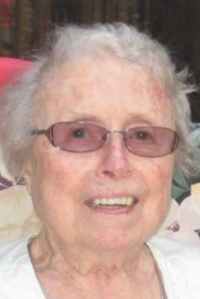 Jeanne Lois McKechnie, 90, of Stonington went to be with the Lord Oct. 9, at home surrounded by her family. She was born Jeanne Lois Foulks, June 8, 1929, in Jersey City, N.J., the daughter of the late Raymond and Georgina Foulks. She was the oldest of four siblings. She graduated from Bob Jones University in 1952. October 25, 1958, she married the late John G. McKechnie. Mr. McKechnie passed away in 2008.
She was a fourth-grade teacher for several years until shortly before the birth of her first daughter, after which she became a full-time mother and homemaker. After moving to Connecticut, she was elected and served several terms on the Groton Republican Town Committee.
She was a lifetime active member of Charity Chapter #61 Order of Eastern Star in Mystic, now Radiant Chapter #11 in Willimantic. Mrs. McKechnie was a member of the Community Baptist Church in Groton.
She was a faithful, caring, and compassionate wife and mother who was known for the impeccable organization of her daily life. She loved reading, golf, and taking care of her family, home, and gardens.
She is survived by a daughter, Jacquelynn Lawrence of Stonington, with whom she made her home; a daughter Karen Wescott of Raleigh, N.C.; a daughter Beth Sweeney of Oakdale; four grandchildren, Jonathan Lawrence, Raymond Wescott, Colin Wescott, and Erin Sweeney; three great-grandsons, Jack Lawrence and Lochlann Wescott, and Noah Shane Subiono; a sister Linda Palmer of Davenport, Fla.; a brother Raymond T. Foulks, of Haslet, Texas; and several nieces and nephews.
Mrs. McKechnie was predeceased by her husband John McKechnie; a sister Barbara Peterson, and one grandson, Shane Sweeney.
The Order of the Eastern Star will conduct their service at 1:30 p.m. Sunday, Oct. 13, at the Dinoto Funeral Home, 17 Pearl Street, Historic downtown Mystic. A Funeral Service will immediately follow at 2 p.m. at the funeral home. Burial will be held at 1 p.m. Monday, Oct. 14, in Elm Grove Cemetery, Mystic.
In lieu of flowers, donations may be made to Vitas Hospice, 628 Hebron Avenue, Glastonbury CT 06033.