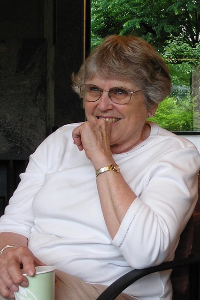 CENTER SANDWICH-----Dale Shoup Mayer, 94, passed away at home at Maple Street, Center Sandwich, NH on Wednesday, October 2, 2019. She died peacefully, after a period of declining health. Her four children were with her on her last day, along with two of her caregivers from a devoted team, Pat Good and Megan Scanlon.

She was the daughter of Carl and Ruth Shoup, and grew up in Riverdale and Briarcliff Manor, New York. Ruth was a member of the New York City Board of Higher Education and a tireless civil rights activist, and Carl was a professor of economics at Columbia University, internationally renowned for overseeing the reform of Japan’s tax system after World War II. Dale graduated with honors in economics from Swarthmore College in 1947. After working for a year at the Office of Population Research in Princeton, New Jersey, she received a Master of International Affairs degree from Columbia University in 1950.

Dale turned down a job at a fledgling government agency called the CIA to stay in New York after she met John Mayer and worked instead at Standard Oil Company of New Jersey as an economic analyst. John and Dale were married in 1951. They were a wonderful team for almost four decades, raising three rambunctious boys and a much better-behaved daughter.

John and Dale raised their four children in Riverdale, NY, outside New York City, with an adventurous year spent in London when John worked at the London School of Economics. In 1970, with a partner she opened Paperbacks Plus, a popular independent bookstore that was a cornerstone of the Riverdale community for 38 years. To prepare for this new endeavor, she took a course about managing a small business.

During these years, Dale was active in a wide variety of community organizations, including the parent cooperative Spuyten Duyvil Infantry nursery school and Ethical Culture Fieldston School; a civil rights initiative to bring residential integration to Riverdale; and a project introducing new design into community playgrounds.

John worked as a research sociologist, his final appointment at Albert Einstein College of Medicine. When he was forced into early retirement there due to the fiscal crisis in New York, they moved fulltime in 1976 to their summer home in Sandwich, cementing a relationship with the Lakes Region that dated back to childhood for Dale, when she spent summers at a rustic family home at Far Echoes, on Lake Winnipesaukee. Partnering with sister-in-law Francie Shoup and a local resident, Dale started up and managed a second small business, a mail order clothing craft business, Charing Cross Kits, headquartered with a retail outlet in Meredith, NH, that operated for a decade.

Dale was energetic, smart, and gave her time generously to a variety of community and civic initiatives throughout her life. She was a wonderful example for her children and friends.

When John died suddenly of a heart attack in 1988, Dale turned her energy to new projects in Sandwich. Ever the pioneer, she built a new home that she adored, located halfway up Red Hill and accessible by a driveway not for the faint of heart. She also planned a run for selectman for the Town of Sandwich, studiously attending all selectman meetings and just observing for a year before running. This allowed her to clearly understand the Selectman’s Office dynamics and begin to establish herself as a credible candidate.

She was elected a selectman in 1990 and served two three-year terms. She accomplished much during her tenure, including a major redesign of the Sandwich beach at Squam Lake and the addition of sidewalks to the Sandwich Children’s Center, and was instrumental in the capping of the town landfill. During her two terms, Dale worked tirelessly to bring disparate groups together. Her desire for compromise was epitomized in her circulating copies of Getting to Yes (Fisher), a book that outlines ways of reaching consensus and forging compromise without rancor and ill-will. She was a remarkably capable person and enjoyed problem-solving, particularly for the community, where she believed good government played a vital role in people’s lives. Later she was a leading member of the Town Hall Renovation Committee, a project that won state accolades for the thoughtful and thorough work. During these and later years, she served on the Board of Directors of the NH Municipal Association. She was an active participant in the operation of the Sandwich Childcare Center, Sandwich Community School, and Sandwich Caregivers and served on the board of the town’s pioneering internet service provider, Cyberpine. With John, she was an early investor in the NH Community Loan Fund and loved to see money invested in diverse and empowering ways. She served on the fund’s board from 2003-2011 and was an officer from 2005-2006. She was a driving force for improving the local, regional and state’s quality of life.

Throughout her civic life in Sandwich, Dale was also a strong advocate for encouraging more women to run for local positions and serve on boards.

Well into her eighties, Dale was busy online and highly organized. In her later years, her children observed a growing number of piles of papers surrounding her. She frequently insisted she would “get to these” but never did, a failure that served as evidence that she was not superhuman.

Dale was a voracious reader throughout her life with wide-ranging interests and curiosity, and a great sense of humor, which was often overshadowed by the deviousness and practical joking of her husband John. With her positive spirit and love of research, she was an extremely capable “go-to” person on any topic of concern.

Dale is survived by a brother, Paul Snedden Shoup, of Charlottesville, Virginia. A brother, Donald Sumner Shoup, her husband John, and her Scottish Terrier Maggie (Margaret Rose of Red Hill) predeceased her.

She is survived by her four children Ellen, Andy, Don and Doug Mayer, in-laws Malcolm Pittman and Michele Roberts, and four grandchildren Genevra and Nick Pittman, Trevor and Noah Mayer, and in-laws Joseph Borkowski and Kim Etingoff. Her great-grandchild, Elise Dale Borkowski, was the joy of her later years.

Dale was not one to have regrets, but her children are certain that she would have liked to see the impeachment of President Trump through to its conclusion. Throughout her life, Dale was an avid “political junkie”, never missing an issue of the New York Times, and in her final years it was not uncommon to enter the house and hear Wolf Blitzer proclaiming the latest “Breaking News” on CNN. A life-long passionate Democrat, she proudly proclaimed her affiliation as a Carroll County Democrat on her car bumper.

She is already very much missed by countless friends and family.

There will be a celebration in her memory on Saturday, December 14, 2019 during the hours of 2-5 pm at the Doris L. Benz Community Center, 18 Heard Road, Center Sandwich.