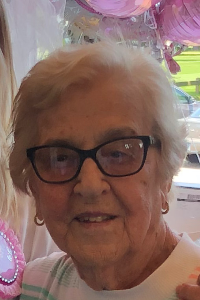 Eleanor (DeGrazio) Mele 94, of Franklin, died peacefully, Wednesday Oct. 9, 2019 with family by her side, at Milford Regional Medical Center. She was the beloved wife of the late Dominic J. “Fegi” Mele, who died in 2017.

Born November 8, 1924, in Franklin, a daughter of the late Gabriele and Maria (Fontana) DeGrazio she was a lifelong Franklin resident.

She was raised and educated in Franklin and was a graduate of Franklin High School, class of 1942.

Eleanor worked, as an attendant for Wrentham State School, was a clerk at the former Kearney Drug store and the former Anne’s Market on West Central Street in Franklin.

She enjoyed spending time with her family, especially her grandchildren and great grandchildren, ceramics, sewing, bingo, and trips to the casino. She was a member of St. Mary’s Church, Franklin, where she made the baptismal garments for the children, was a former poll worker for the towns elections and a former member of the Franklin Sons of Italy.

She was the sister of the late Rico, Michael, Albert DeGrazio, Josephine Brunelli and mother in law of the late Leonard Federico.

Relatives and friends are invited to attend her funeral Tuesday Oct. 15th, at 9AM from the Charles F. Oteri and Son Franklin Funeral Home 33 Cottage St. followed by a funeral Mass in St. Mary’s Church, 1 Church Square Franklin, at 10AM.

Calling hours are Monday from 4-7PM.

In lieu of flowers, donations in her memory may be sent to the American Heart Association 300 5th Ave. Waltham, MA 02451.