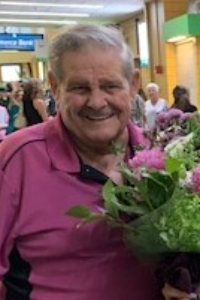 Loran H. “Huck” Huckins, 71, of Auburn died peacefully on Tuesday, October 8th in UMASS Memorial Medical Center – University Campus surrounded by his loving family. He leaves his wife of 47 years, Deborah J. (Baris) Huckins; three sons, Jason L. Huckins of Raleigh, NC, Christopher J. Huckins and his fiancé, Jennifer L. Zecco of Northborough, and Adam W. Huckins of Worcester; his mother, Florence (McNeil) Huckins of Charlton; four grandchildren, Noemi, C.J., Sofia and Giovanni; and siblings, Eleanor Meyers, Dale Morrisey, Norma Antkowiak, and Don Huckins. He also leaves many nieces, nephews, and extended family. He was predeceased by a brother, James Huckins.
He was born in Worcester the son of H. Loran Huckins and graduated from Auburn High School. Huck was a Veteran of the United States Navy Seabees proudly serving two tours in Vietnam. In 2010, Mr. Huckins retired from Huck’s Trucking which he owned for over 10 years. He previously worked for A. Amorello and Sons for over 20 years where he worked as a truck driver. In his retirement, Huck worked at Clearview Country Club. Huck was a member of the Chester P. Tuttle American Legion Post 279, the Charles F. Minney VFW Post 3329, Millbury and the Teamsters Local 170.
Mr. Huckins was an avid golfer who had two holes in one over the course of his life but had many more close calls. Huck was a good friend to many.
His funeral is Saturday, October 12th with a service at 10:00 AM in O’CONNOR BROTHERS FUNERAL HOME, 592 Park Avenue, Worcester. Burial will follow in Hillside Cemetery, Auburn. Calling hours are Friday, October 11th from 4:00 until 7:00 PM in the funeral home. In lieu of flowers memorial contributions may be made to the Cancer Research Institute (www.cancerresearch.org).