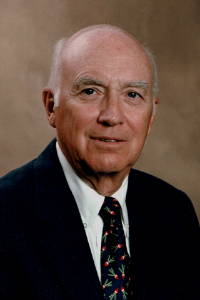 Mr. Henderson was born on April 9, 1931 to George and Mary Henderson. He attended St. Francis Xavier, a Jesuit high school in Manhattan; always a leader, he was president of his class, captain of the football team, and captain of the junior reserve officer training corps (ROTC).

Mr. Henderson attended Dartmouth College, receiving a BA in 1953 and an MBA from the Amos Tuck School of Business in 1954. He was commissioned as a second lieutenant in Dartmouth’s ROTC course; with the aftermath of the Korean War still in force, the U.S. Air Force ordered him to report for duty six weeks after his Tuck graduation. For two years he served in Japan, which he counted as one of the most important periods of his life.

Returning from Japan, Mr. Henderson embarked on a storied business career, throughout which he was known for his hallmark traits as a sharp observer, a calm communicator, and a man of absolute integrity.

He first joined IBM, where he was a young star in the data processing division. More importantly, he met his wife at an IBM training program; he proposed on their sixth date and they were married November 30, 1957.

In 1960 Mr. Henderson transferred to Honeywell Information Systems, where he worked for 15 years, ultimately serving as Group Vice President for North American Operations. An early thought leader on issues of computer privacy and data security, he testified before Congress in 1970. In a speech that was widely discussed and republished, he warned of a coming “pollution of privacy” and the potential for “a new sort of computerized power politics.” He advocated for legislation enabling citizens to challenge release of their private data without their consent and for computer manufacturers to build safeguards into their systems.

In 1975 Mr. Henderson left Honeywell to become Chairman and CEO of Itek Corporation, a leading supplier of electro-optical systems for the US defense industry. Once a Wall Street darling, Itek’s stock had plummeted; under Mr. Henderson’s clear-eyed leadership the company rebounded, and in 1983 Mr. Henderson orchestrated Itek’s sale to Litton Industries.

Later that year, he joined venture capital firm Greylock Partners as a general partner and later Chairman. He initiated strategic planning, and created a limited partnership focused on management buy-outs; a generous mentor and advisor, he brought crucial hands-on operating experience to many young tech firms. He retired in 1998.

Throughout his career, Mr. Henderson was a sought-after board member, serving on a range of corporate boards. He was Chairman of the Board of the Federal Reserve Bank of Boston, and Chairman of the Conference of all the Federal Reserve banks. He was a Director of Cabot Corporation, Eastern Enterprises, All America Insurance, Filene’s Basement, Simonds International, DBS, Inc., Thompson McKinnon, Massachusetts Blue Cross and several other corporate boards.

Mr. Henderson was equally committed to serving the broader community, generously giving both his time and resources to a host of non-profit institutions. He was a persuasive fundraiser for many of these organizations, in addition to being an enthusiastic financial supporter himself. Education was a primary focus.

While his four sons were young, he devoted his weekends to running the Wellesley Boy Rangers, an organization for boys aged 9-12 and their fathers. Later, he served as a Trustee of Noble and Greenough School and of Babson College, and as an Overseer of the Boston Museum of Science and of the Deaconess Hospital. He became involved with the Museum of Fine Arts, Boston through his wife, joining first as an Overseer, then becoming a Trustee, and Life Trustee. During his tenure as President and then Chairman of the Board, he led the MFA through a time of dramatic transition and expansion. He was also a Trustee of the Sherman Fairchild Foundation and the Boston Athenaeum. In 2003 he was elected as a Fellow of the American Academy of Arts and Sciences.

Mr. Henderson felt that his years at Dartmouth changed his life, and he remained devoted to the school, serving as Chairman of the Overseers of Tuck School and then as a Trustee of the College from 1981-1991, during which time he was chair or vice-chair of six committees, including the Investment Committee and the Nominating Committee. He was also founding Chairman of the President’s Leadership Council, a role he held for seven years. Dartmouth recognized this outstanding service by presenting Mr. Henderson first with the Dartmouth Alumni Award in 1993, and then with an Honorary Doctor of Law Degree in 2003.

Mr. Henderson was a member of the Somerset Club, the Windsor Club, the Commercial Club of Boston, the Baker Hill Golf Club, and the Wellesley Country Club.

In his autobiography, Mr. Henderson attributed his success to the strength his family provided, yet they would say he fueled that strength, demonstrating in word and deed that family is paramount. He will be remembered for his incredible kindness, his generosity of spirit, and his wonderful sense of humor.

In lieu of flowers, the family asks that memorial contributions be made to Dartmouth College, Henderson Scholarship Fund. Checks may be sent to: Dartmouth College; 6066 Development Office; Hanover, NH 03755.